When you think of creepy the actor Michael Cera doesn’t immediately pop into you mind but after watching the trailer for his new flick MAGIC MAGIC, you won’t be able to say that anymore.

Sony will be releasing the flick on Blu-ray August 6th and the official synopsis states:

“While vacationing with a friend in the spectacular Chilean lake district, young American traveler Alicia (Temple) begins seeing disturbing images visible only to her. Her best friend Sarah (Browning) suddenly returns to Santiago, leaving Alicia in an unfamiliar country surrounded by strangers (Cera and Sandino Moreno). More and more she unravels, seeing darker visions and hearing chilling noises that send her running into the woods. In this disturbing landscape, she experiences crushing terror and knows that she must escape. A destabilizing, psychological thriller recalling the best works in the genre, this film entices viewers into a world they won’t be able to forget.”

Ready for some creepy Cera? Here ya go.

The Blu-ray release will also feature a “Making Of” featurette. 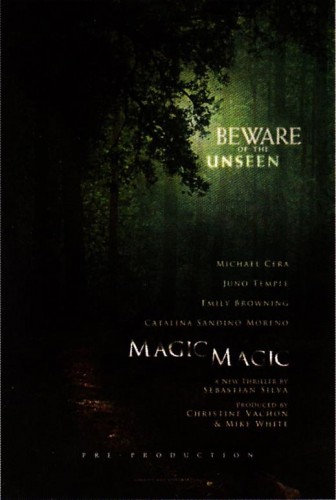