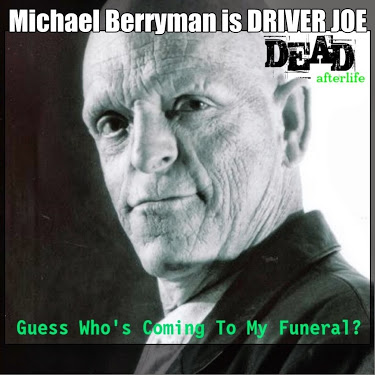 Jared Cohn, director of popular Bikini Spring Break, Hold Your Breath, and 12/12/12, has been secured to direct Dead Afterlife.   Horrornews.net’s Michael Joy has written the script for the movie, currently in development, that follows Pharmaceutical Representative Donald Conlee who discovers a miracle drug called “Awake,” soon to be released to the world as a breakthrough for brain trauma. Conlee is unaware of the adverse effects of the drug until he becomes the experiment.

“Joy has found a way to re-define the zombie genre,” said Cohn.  Joy crafted a logline that is making industry professionals turn their collective heads and take notice:  “The ghost of Donald Conlee finds himself attending his own funeral only to be surprised that his zombie counterpart is eating all his guests. Now, it’s up to Donald’s ghost to figure out how to get Donald’s undead body back into his grave.”  Veteran Director Tom Holland (Childs Play and Fright Night) said, “Michael Joy’s writing is terrific.”

Horror genre icons Michael Berryman (The Hills Have Eyes) and Bill Oberst, Jr. (Abraham Lincoln vs. Zombies) are attached to the horror/comedy.  “My honest opinion (and this is being honest) it is f**king brilliant.  A ghost watching his undead body eat funeral guests?” said Oberst, Jr. “Oh my God! Have ghosts and zombies ever been mixed? It expands both genres.”

Joining the cast are horror fan favorites, Bill Moseley (Texas Chainsaw 3D andHolliston TV series) as Gravedigger Jaggers and Kane Hodder (Hatchet III and Friday the 13th movies) as Gravedigger Mantell.   Marie Y. Lemelle (Holla II), one of the producers, said “Joy’s twisted story is a perfect fit for the horror veterans and the legendary pro-wrestler Austin”Universal Heartthrob” Idol as the Gatekeeper.  Jared has the experience to take their performances to another level of gore and fun.”

The feature length movie is scheduled to begin shooting in 2014 on location in Pennsylvania.  “We are excited about bringing this amazing ensemble to Pennsylvania which offers a great program of 25% tax credit for in-state production expenditures of 60% or more,” said Joy, who also writes for the paranormal column, UNEXPLAINED CONFIDENTIAL.

Cohn is repped by Xpose Talent Agency.  Joy, Lemelle, and Oberst, Jr. are members of Slated.

Horrornews.net is a popular horror genre site marketed to all aspects of the Horror industry.  Read more comments about the “DEAD afterlife” logline www.screenplayfest.com/archives/review/dead-after-life.