Home | All The Info You Need On the Blu-ray Release Of DRACULA: PRINCE OF DARKNESS

All The Info You Need On the Blu-ray Release Of DRACULA: PRINCE OF DARKNESS

Time to ask your boss for some more overtime cause I’ve got another must have Blu-ray that’s heading our way.

It’s Hammer’s DRACULA: PRINCE OF DARKNESS and all the info is below:

Millennium Entertainment is pleased to reveal the final artwork and announce details for its upcoming high-definition release of the classic 1966 Hammer film Dracula: Prince of Darkness on September 3rd. Directed by Terence Fisher and starring the iconic Christopher Lee, Barbara Shelley, and Andrew Keir, Millennium’s Collector’s Edition of Dracula: Prince of Darkness marks the first time that horror fans in the US will be able to enjoy the film on Blu-ray. Millennium is also planning to release several other Hammer Films on Blu-ray later this year including Quartermass and the Pit, The Plague of the Zombies, and The Devil Rides Out.

In this direct sequel to Hammer’s Dracula (1958), Christopher Lee returns for more blood as he encounters a group of stranded English tourists who are holidaying in the Carpathian Mountains. Despite receiving several warnings by the unconventional Father Sandor (Andrew Keir) along their travels to stay as far away from the Count’s castle as they can, the group end up stranded there, with their host set to be resurrected upon their arrival. Will the travelers survive their fateful meeting with Dracula: Prince of Darkness? 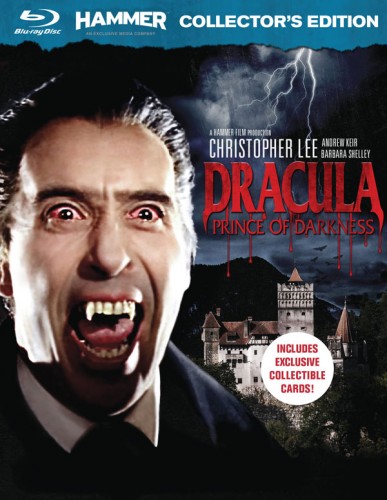