Take a gander at these Female Empowerment reads! More info below

At Bluewater Productions, we believe that it is important for readers to have inspiring role models, to learn about extraordinary individuals that have overcome challenges to make a difference in the world. That was the thought process Darren G. Davis went through before creating the comic book series “Female Force.”

“We wanted to showcase the strong women in today’s society that have inspired generations and shaped the culture of today,” Davis said. “Kids and adults alike can look up to these women as great role models.  One of the coolest things about the comic books is that we found schools using them for reluctant readers.”

“Female Force” has featured actors, politicians, authors, and musicians—everyone from Angelina Jolie, Hillary Clinton, Ellen DeGeneres, Sonia Sotomayor, Michelle Obama, Gabrielle Giffords, Condoleezza Rice to J.K. Rowling and Cher. These biographical comics, written by some of the most talented writers in the comic world and beyond, deliver an informed and illustrated look into the lives of these figures.

This week “Female Force: Ruth Bader Ginsburg” will be released.  The single issue, is written by Bill Mulligan and art by Tsubasa Yozora.  The “Female Force” series that features on extraordinary women that make a difference in society, features on Ruth Bader Ginsburg.  Since the Clinton administration appointed her making her the second female to be an Associate Justice of the Supreme Court of the United States.  This comic book features her life story from the start!.

We have used our “Female Force” series as an outlet to broaden awareness on important challenges that face many people. In “Female Force: Carrie Fisher,” the former Star Wars actress bravely shares her lifelong struggle with bipolar disorder. Proceeds from the comic book sales are donated to Silver Hill Hospital in New Canaan, Connecticut, a facility specializing in mental disorders. Likewise, Grease star Olivia Newton-John uses her “Female Force” issue as a platform to discuss her fight against breast cancer and raise awareness for the devastating disease.

“Female Force” has been embraced by the media and featured on several television news outlets including The Today Show and on CNN. The series has also been featured in many publications such as The LA Times, MTV.com, Time Magazine, and People Magazine. Future titles will feature Gloria Steinem, The Queen of England, Helen Gurley Brown, Melinda Gates, and Mary Pickford.

Print copies of “Female Force” can be ordered at www.comicfleamarket.com and found on Amazon. 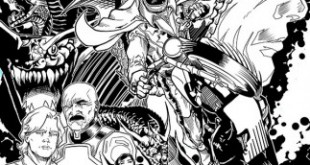