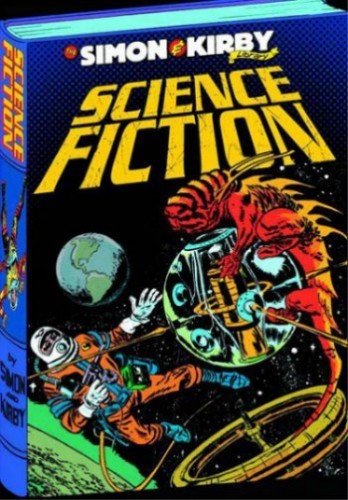 The Simon and Kirby Library: Science Fiction spans more than 20 years, beginning with the first stories Joe Simon and Jack Kirby ever produced together (beginning in June 1940)–their ten-issue run of Blue Bolt adventures. Then the Cold War years will be represented by Race For the Moon, featuring pencils by Kirby and inked artwork by comic book legends Reed Crandall, Angelo Torres, and Al Williamson.

Joe Simon and Jack Kirby are among the most iconic collaborators in the realm of comics. Like John Lennon and Paul McCartney, the duo possessed a unique and creative synergy when working together. They paired up countless times over the years, most notably in the creation of Captain America in 1941. In addition to their achievements with superheroes, they also successfully tackled the science-fiction genre.

The book begins with a heartfelt foreword by Watchmen co-creator and illustrator Dave Gibbons. From there, the tome is broken down by decade, each with an short, introductory piece by critic/historian Peter Sanderson to set the stage. Along with Simon and Kirby, legendary comic artists such as Reed Crandall (Blackhawk), Angelo Torres (Creepy), Al Williamson (Weird Science) and Wally Wood (Daredevil) are represented in the works.

Simon and Kirby’s collaborations began during the golden age of comic books, the 1940s. Most notably, this section presents all 10 issues of Blue Bolt for the first time in 70 years. The origin story follows Fred Parrish, an all-American athlete who receives the abilities of flight and super-strength after being struck by lightning; combining super hero and science fiction into one adventure. Its fifth issue is considered a major landmark, as it was the first to be feature both Simon and Kirby on the byline.

The 1950s marked a prolific period of Simon and Kirby’s teamwork. It’s also my favorite section of the book, as there is a noticeable shift in focus from superheroes to more traditional sci-fi. The inclusions are largely one-off stories from larger comics such as Black Cat Mystic, Alarming Tales and the famed Race for the Moon. This continues into the ’60s, when the pair worked on such comics as Alarming Adventures, Blast-Off and Unearthly Spectaculars. Lastly, there are two rare, unpublished proposals: Tiger 21 and Jove U.N.Born & His Checkmates.

In addition to stellar reproductions of the comics, the product itself is presented beautifully. Weighing in at over 3 pounds, the hardcover book features a nice slipcover and an equally-attractive cover underneath. The 320 pages are a nice, thick stock of paper, with vibrant colors popping right off them.

Although we lost both Joe Simon and Jack Kirby (in 2011 and 1994, respectively), their legacies live on through the pages of the stories. They were highly talented individuals – both of them could write, pencil, ink and letter – but when they came together, it was something truly special. It’s fascinating to see their progression as artists, story tellers and collaborators, as they become inspired by real-world events of the time (World War II, the space race, etc.).

Even if you’re not familiar with the dream team’s work beyond Captain America, The Simon & Kirby Library: Science Fiction is a great buy for any comic fan. The stories within bring to mind Flash Gordon’s combination of superhero and sci-fi, space operas such as Star Trek and Star Wars and the creative flare of The Twilight Zone.