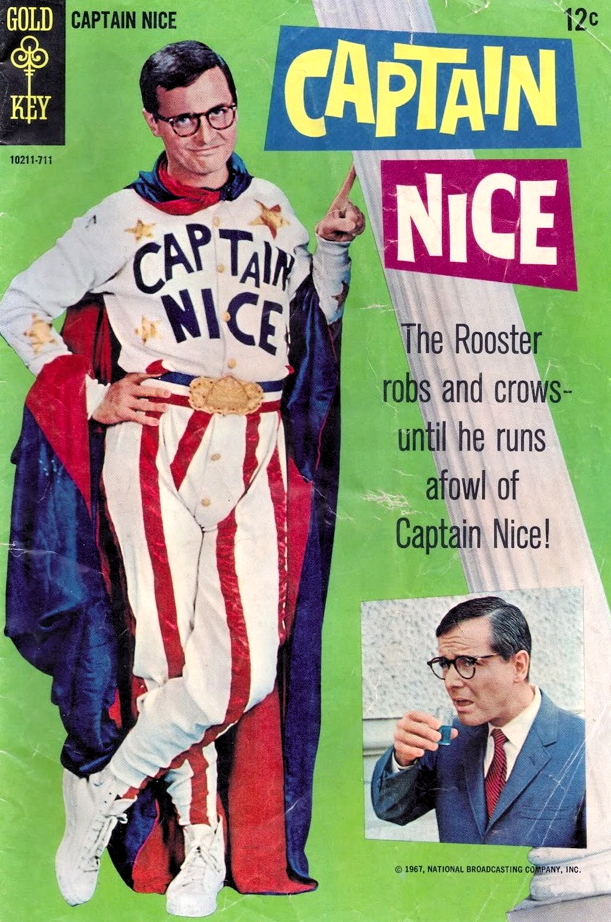 The 1909 edition of the Oxford English Dictionary gave the first definition of ‘camp’ humour as, “Ostentatious, exaggerated, affected, theatrical, effeminate or homosexual.” This interpretation was probably derived from the French term ‘se camper’ meaning ‘to pose in an exaggerated fashion’. The term became commonly used after Susan Sontag published a landmark 1964 essay on the subject and, coincidentally, much of the cult following of camp humour grew rapidly during America’s transition from black-and-white to colour television in the mid-sixties. It wasn’t until the television version of Batman (1966-1968) – one of the most famous examples of camp humour in popular culture – that the link was made explicit, with the inherent ridiculousness of the concept exposed as a vehicle for comedy. The characters in Batman were costumed to exploit the new colours and changing fashion styles in ways that took advantage of camp. 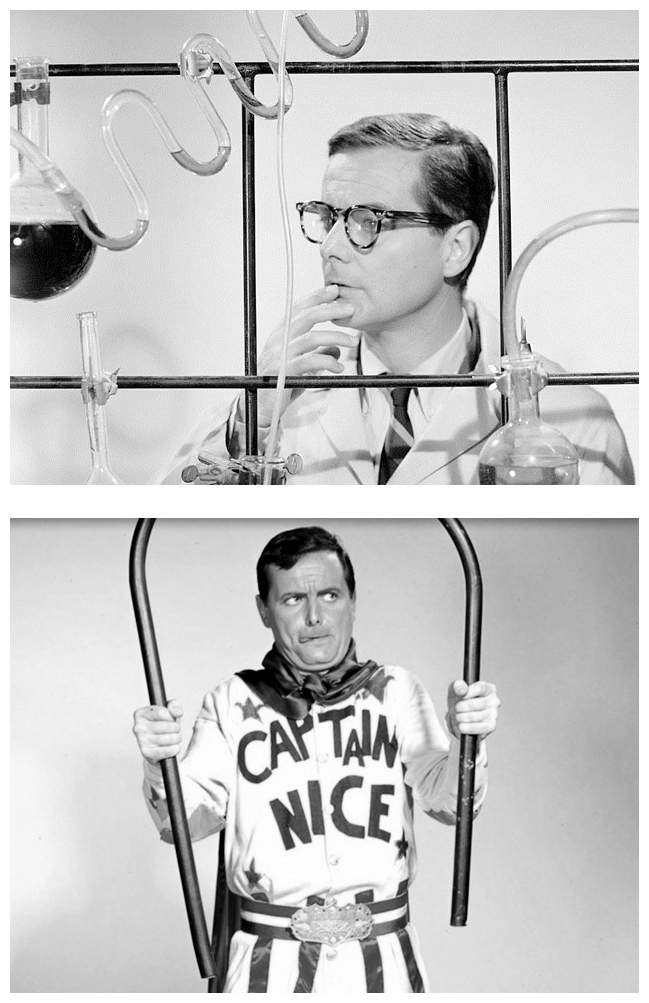 The stylised content of Batman helped kick-start television campiness, and series like The Avengers, The Addams Family, The Munsters, Gilligan’s Island, Lost In Space, The Wild Wild West, Get Smart, Charlie’s Angels, Fantasy Island, CHiPs and Are You Being Served? are enjoyed today for what are interpreted as their ‘camp’ aspects. Ironically, even Batman fell victim to parody with the release of Captain Nice and Mr. Terrific, which layered extra camp onto the already overladen superhero concept. At the time when the series ran on television, the two other major networks were scrambling to compete with the ABC network and their overwhelmingly popular show Batman. Each of them were looking to capitalise on the superhero craze of the sixties, so NBC produced a forensics scientist who drank a special potion that made him into a superhero, and the CBS network drew up similar plans for its own superhero. 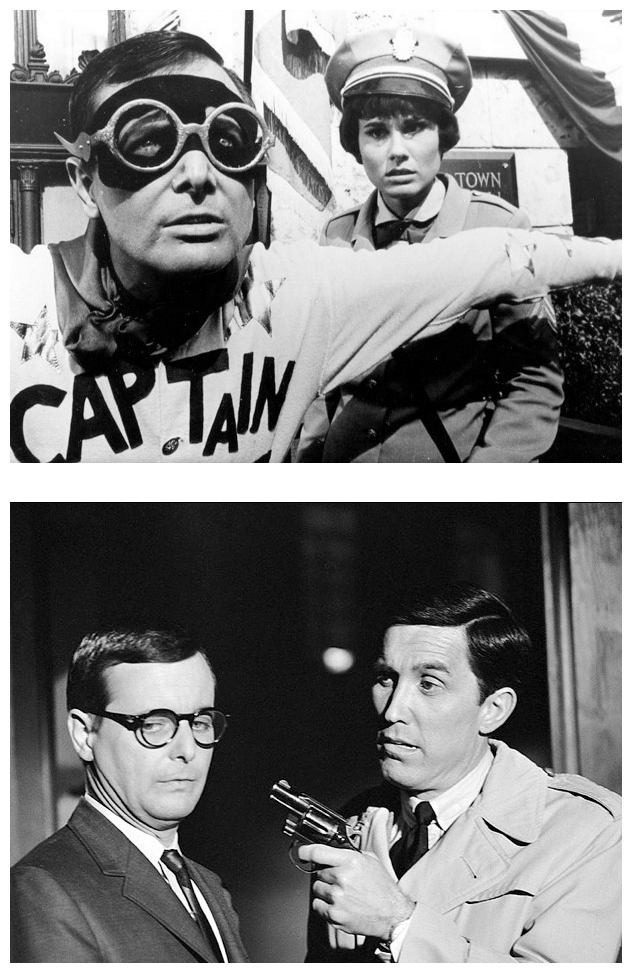 Both shows debuted the very same Thursday night – the 9th of January – a half-hour apart, and ran until the end of the first season. Of the two, Captain Nice was probably the best written and produced, while Mr. Terrific was the most bizarrely original. Created and written by Buck Henry (co-creator of the spy parody Get Smart), Captain Nice was a half-hour comedy series featuring a chemist-turned-superhero that ran from January to May in 1967 on the NBC network. Carter Nash (William Daniels) was a police department chemist who had accidentally discovered a liquid that, when ingested, would transform him into Captain Nice (a security guard asks him what the C.N. on his belt-buckle stands for and he says, “Captain…Nice?”). Unfortunately, Captain Nice was no stronger a personality than Carter Nash was normally – shy, quiet, unassuming and a ‘mummy’s boy’. In fact, if it had not been for his mother (Alice Ghostly), who demanded the her son wage war on the evil forces that constantly threatened society, he would not have become actively involved in fighting crime at all. 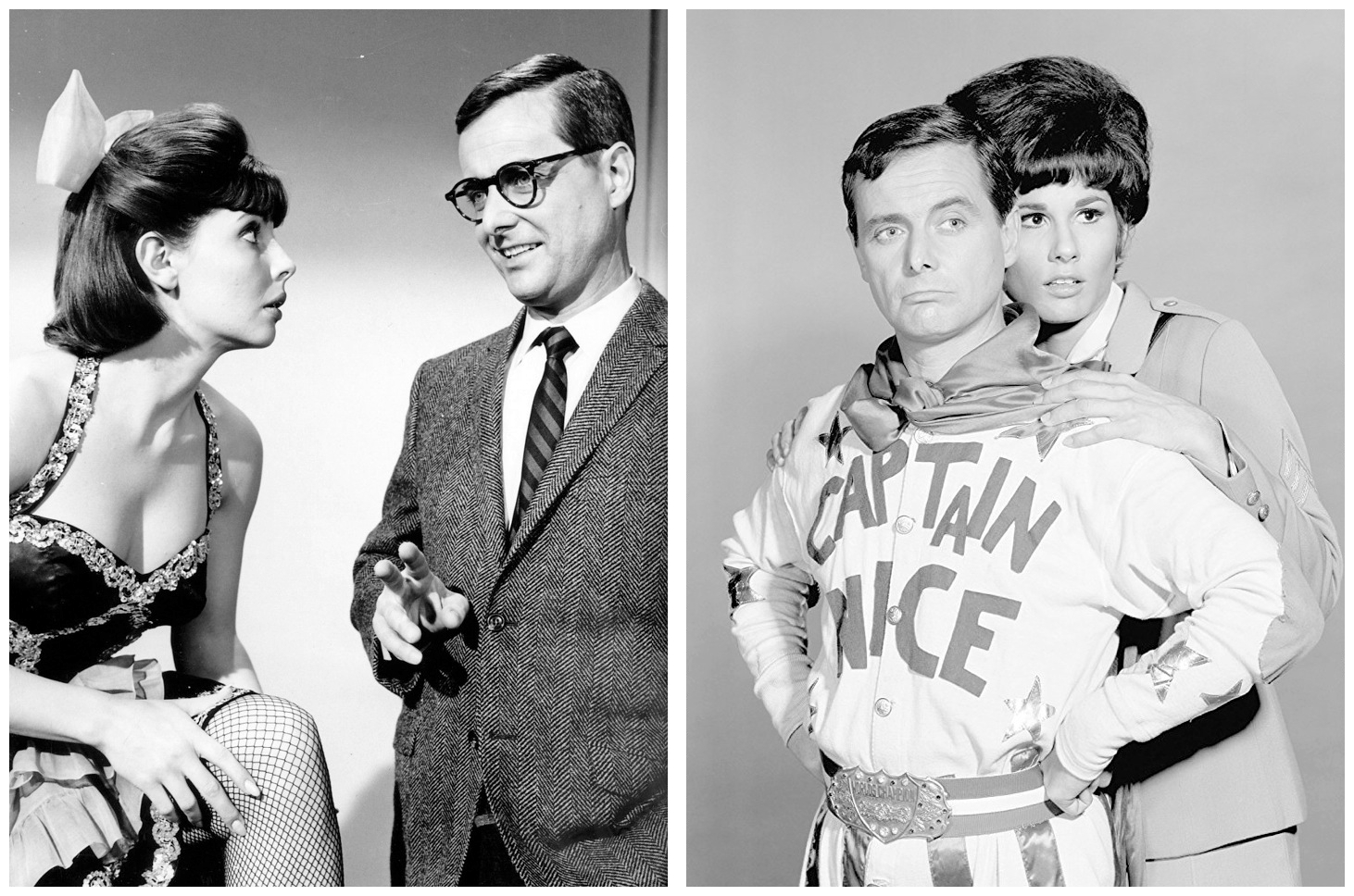 The sight of Captain Nice trying to maintain his composure while flying over Bigtown (he had an acute fear of heights) in his baggy moth-eaten red-white-and-blue leotards (made for him by his mother) did not exactly terrify evildoers. The same year as Captain Nice, William Daniels appeared in two of his most famous roles, as Dustin Hoffman‘s father in The Graduate (1967), and as Howard in Two For The Road (1967). He won two Emmy awards for his role of Doctor Mark Craig in St. Elsewhere, but he’s probably best known as the voice of KITT in the cult series Knight Rider with his human sidekick David Hasselhoff. Alice Ghostly, who plays Carter’s mother Mrs. Nash, was only three years older than Daniels, and is best remembered for her roles as the accident-prone Esmeralda in Bewitched, Cousin Alice in Mayberry RFD, and Bernice Clifton in Designing Women. Other regular characters included Carter’s girlfriend, a meter-maid/police sergeant named Candy Kane (Ann Prentiss), police Chief Segal (Bill Zuckert) and Mayor Finney (Liam Dunn). 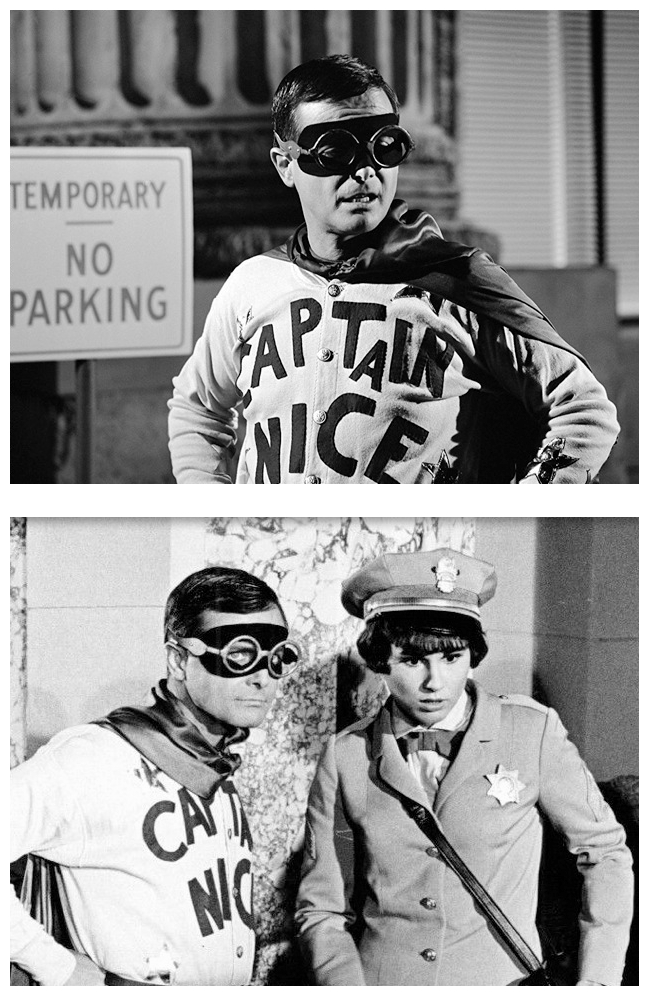 The series ran for only fifteen episodes and featured some of the finest comedy actors of the era in guest roles, including Joe Flynn, Bob Newhart, Jo Anne Worley, Arthur Malet, Celeste Yarnall, Simon Oakland, Vic Tayback, Daniel J. Travanti, Joseph Campanella, Victor French, Charles Grodin and Pat Harrington Jr. The opening theme (“Look! It’s the man who flies around like an eagle. Look! It’s the enemy of all that’s illegal. Look! At the muscles on those arms, they’re like hammers. Look! It’s the nut who walks around in pyjamas. That’s no nut, boy, that’s Captain Nice!”) and most of the music was composed by Vic Mizzy, famous for The Addams Family and Green Acres, and the series was also complimented by six of the best directors to work in American television, each with literally hundreds of credits: Gene Reynolds (from Alfred Hitchcock Presents to Touched By An Angel); Jud Taylor (from Doctor Kildare to Law & Order SVU); Gary Nelson (from Have Gun Will Travel to Early Edition); Charles Rondeau (from The Littlest Hobo to BJ & The Bear); Richard Kinon (from Four Star Playhouse to The Love Boat); and Hollingsworth Morse (from The Lone Ranger to The Fall Guy). 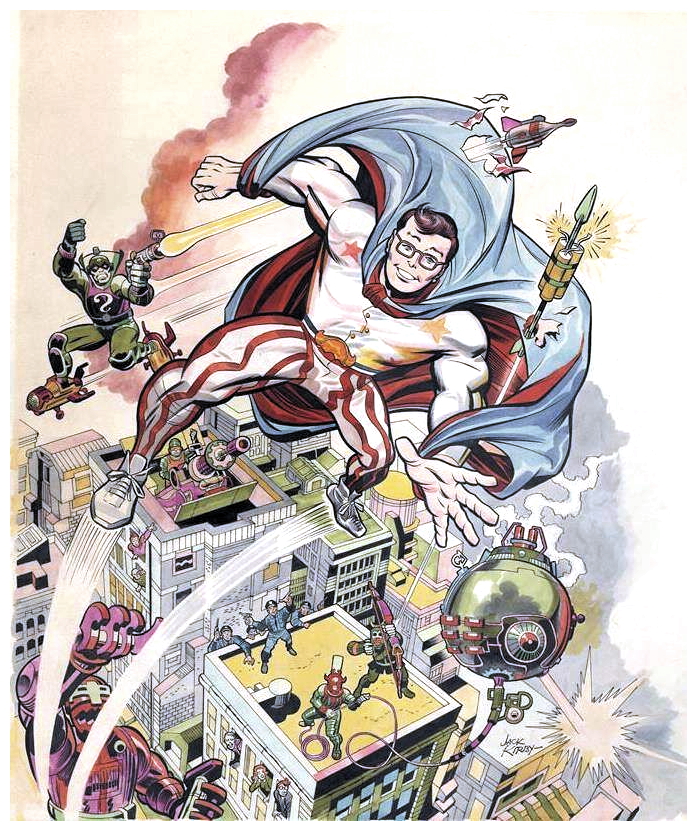 As part of NBC‘s promotional campaign for its new television show, the executives hired the legendary Jack Kirby to render an illustration that captured Captain Nice in action. This art was used in a number of promotional advertisements and, seriously, no one in the world of comics could have done Captain Nice better justice than Kirby.

Episode #1 – The Man Who Flies Like A Pigeon. Police chemist Carter Nash concocts a special potion that gives him superpowers, and tries to explain the importance of his new formula. Unbeknownst to Nash, he is being closely watched by villainous Gregory Omnus (Kelton Garwood) who wants the formula for himself.

Episode #2 – How Sheik Can You Get? Sheik Abdul (Larry D. Mann) and his minions arrive in Bigtown where they encounter Sergeant Candy Kane. The potentate decides she would make an excellent tenth wife, and it’s up to Carter Nash as Captain Nice to prevent it without causing any diplomatic problems. 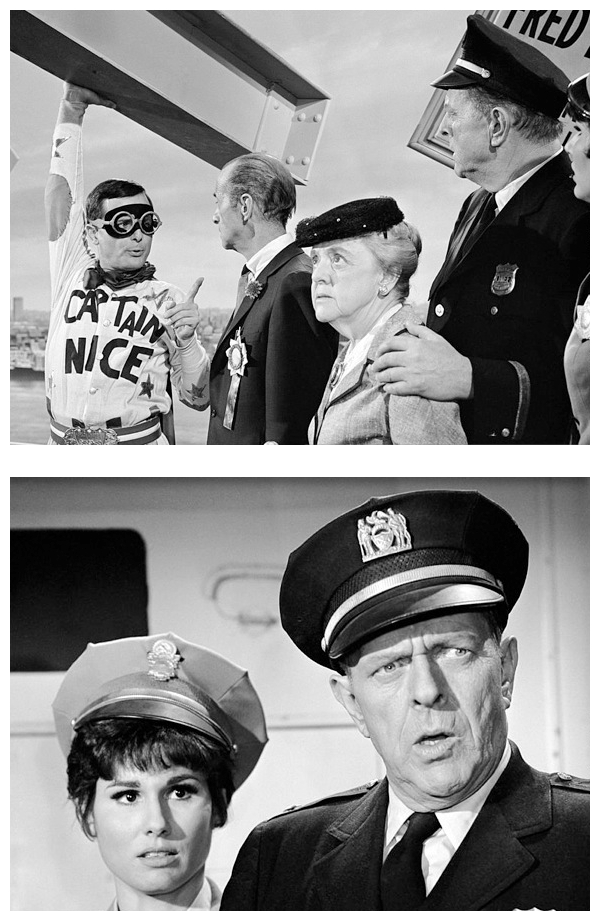 Episode #3 – That Thing. A caterpillar develops a ravenous appetite and superpowers when it accidentally drinks Nash’s secret formula.

Episode #4 – That Was The Bridge That Was. Con artists build a faulty bridge and then kidnap Mayor Finney. This looks like a job for Captain Nice.

Episode #5 – The Man With Three Blue Eyes. Medula The Mentalist (John Dehner) is kidnapped by thugs who think he can find a fortune in stolen money (Medula lives to return in the final episode Beware Of Hidden Prophets).

Episode #6 – Is Bigtown Burning? Carter Nash, in his Captain Nice identity, is to testify in court. But nefarious arsonist Lipton (Vic Tayback) knows his secret persona and threatens to expose it if he does. Lipton also has a few fires planned. 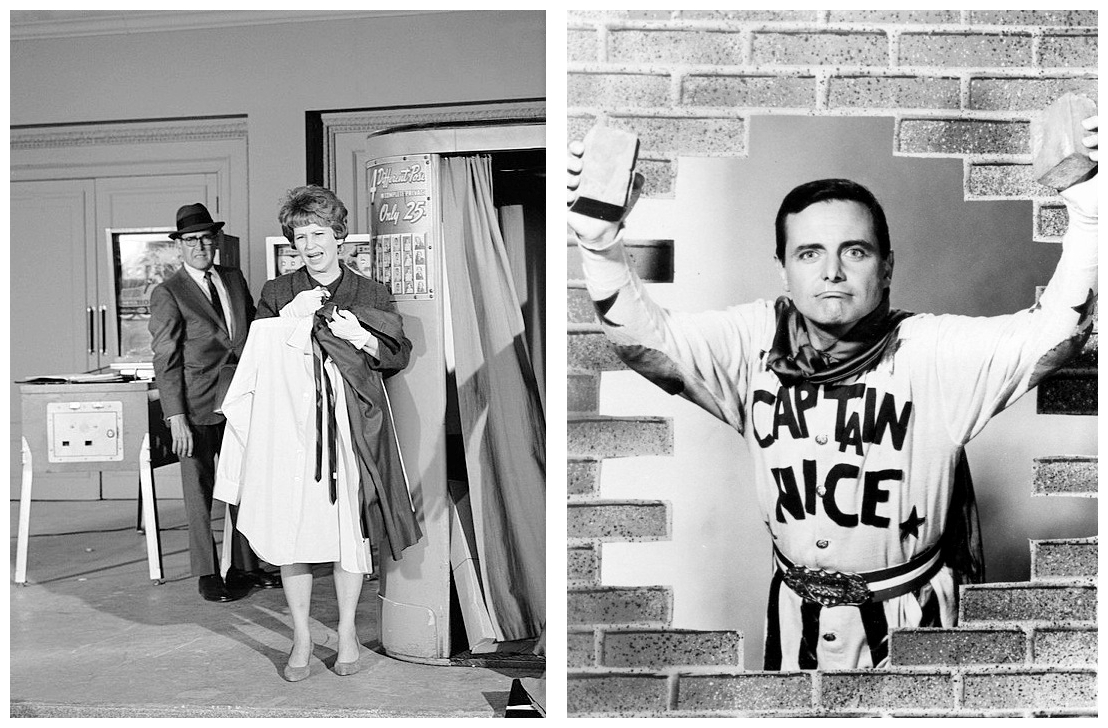 Episode #8 – That’s What Mothers Are For. Carter is dismissed from his job due to an economy move and his mother retaliates by stealing his costume. The plot involves the theft of a valuable gem which is frequently referred to as ‘the fabulous Selma Diamond’. Selma Diamond was a well-known comedy writer and actress, best known today as the elderly bailiff Selma Hacker in the television series Night Court.

Episode #9 – Whatever Lola Wants. While trying to stop a prison break, Captain Nice is slipped a pill that makes him appear intoxicated.

Episode #10 – Who’s Afraid Of Amanda Woolf? Captain Nice breaks up a potential massacre so, in retaliation, the gang invades the Nash home. 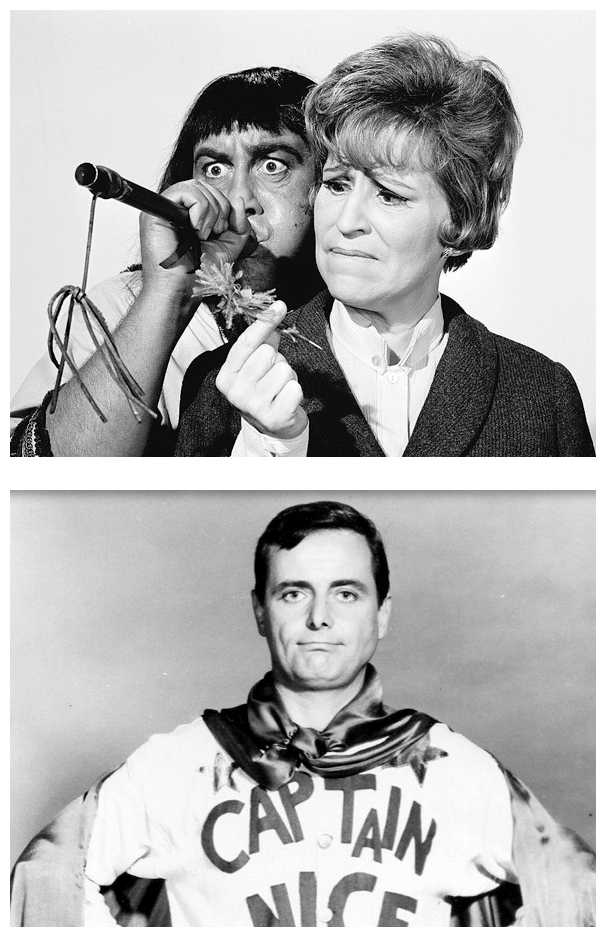 Episode #11 – The Week They Stole Payday. Carter discovers that the Bigtown payroll has been replaced with counterfeit money.

Episode #12 – It Tastes Okay But Something’s Missing. Captain Nice learns of a major robbery being planned and is determined to stop it, but he has a problem as he is out of the formula that creates his invisibility and must get his hands on a new batch.

Episode #13 – May I Have The Last Dance? Carter and Sergeant Kane are captured by fur thieves.

Episode #14 – One Rotten Apple. Conceited nightclub owner Lloyd Larchmont (Bob Newhart) needs to be protected from potential killers. At one point, Sergeant Kane knocks Larchmont to the floor, out of the way of a falling light fixture and saves his life. She asks him if he’s all right, and he responds with typical Newhart deadpan, “All right? I’m darn near perfect.”

Episode #15 – Beware Of Hidden Prophets. Carter is fired when Medula The Mentalist (John Dehner) predicts a criminal will escape from prison. 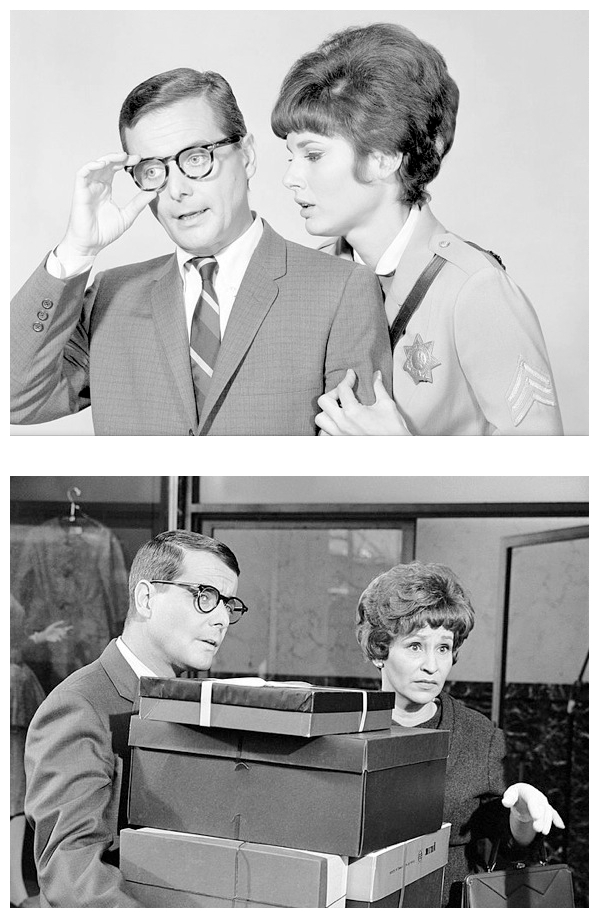 Unfortunately, as the ratings declined for Batman, so did the ratings decline for the shows it inspired. Captain Nice ran until the end of the 1967 season, and then was cancelled by NBC. Not long after, William Dozier‘s Batman series was reduced to one episode a week and then finally cancelled it altogether. That being said, there were unsubstantiated rumours at the time that Captain Nice and Mr. Terrific were cancelled because both heroes required to take drugs to become super (Mr. Terrific had to swallow a pill the size of a golfball). As far as I can tell, Captain Nice has never been released officially on DVD although, in 2011, it was released in Germany (Region 2 DVD only) under the title Das Geheimnis Der Blauen Tropfen: Die Komplette Serie (The Mystery Of The Blue Drop: The Complete Series). Unfortunately, it’s not that complete. It’s all dubbed in German with no English subtitles or language options, and some episodes are heavily edited – one of them runs for only fourteen minutes! It’s on this sad note I’ll bid you a fair fondue…a frail frond? A frontal fondle? I mean, a fond farewell until we meet here again in seven days so I may bewilder you with another amazing oddity on the best website with the worst films ever…Horror News! Toodles! 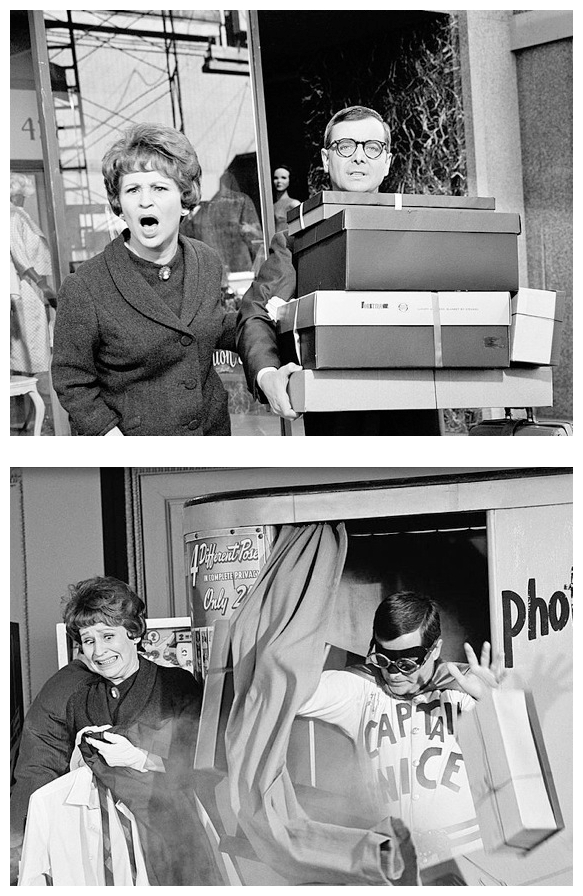 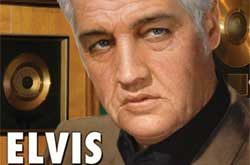 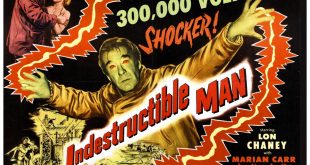