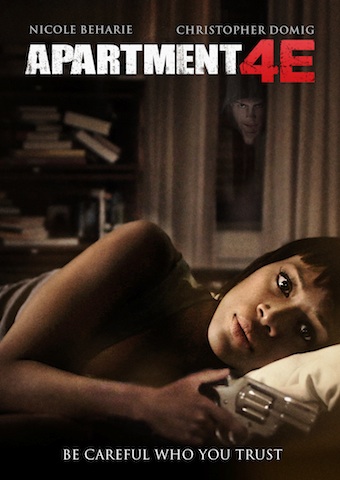 One Village Entertainment, an RLJ Entertainment (NASDAQ: RLJE) brand, announces the release of the urban thriller film, Apartment 4E (formerly known as Small of Her Back), available on DVD on May 21, 2013 at an SRP of $14.98. Starring Nicole Beharie (42, Shame) and Christopher Domig (Second-Story Man), the film was written and directed by Russell Leigh Sharman.

Piper (Beharie) is a beautiful, intelligent young woman with everything to live for…but she’s trapped in a dark world of her own making. Deeply troubled, desperate and clutching a handgun, Piper has not left her apartment in a long time, and when there’s a knock on the door, she will face a choice that will make the difference between life and death. This stranger may have the answers to the mystery at the center of Piper’s world, or he may have his own reasons for tracking her down. The truth lies up the stairs and down the hall in Apartment 4E.

A passion project for Sharman, the film received partial funding from a Kickstarter campaign in 2010, reaching 126 backers and raising its goal of over $10,000. The movie then made its world debut at the Urban World Film Festival in New York in 2012 and at the Pan African Film Festival in Los Angeles earlier this year.