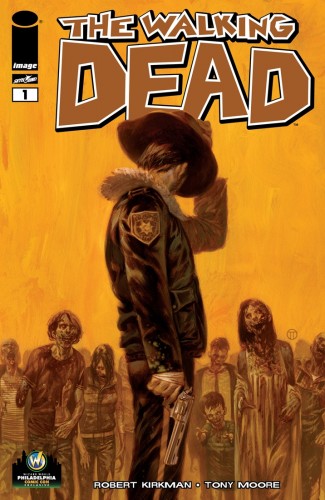 Tedesco will be on hand at the Pennsylvania Convention Center throughout the event to sign copies of the limited-edition comic, produced in extremely limited quantities and available to fans only while supplies last. The first two covers were illustrated by Michael Golden (Portland) and Arthur Suydam (St. Louis). A different superstar artist will draw the variant cover art for each of the five remaining scheduled Wizard World shows this year. Neal Adams is drawing the cover for the NYC Experience (June 28-30), and more cover artists will be announced shortly.

Norman Reedus (“Daryl Dixon”), Michael Rooker (“Merle Dixon”) and Jon Bernthal (“Shane Walsh”), stars of the AMC series based upon The Walking Dead, will attend Wizard World Philadelphia Comic Con. Comics legend Stan Lee, “Firefly” and Serenity headliners Gina Torres and Summer Glau, John Barrowman of “Torchwood” and WWE® Superstar John Cena® are among the other top celebrity guests scheduled to appear. They will be joined by a top-drawer collection of well-known artists and a variety of activities, exhibitors and special attractions in the third event on Wizard World’s 2013 calendar and one of its flagship shows.

The Walking Dead graphic novels accounted for seven of the 10 bestselling titles of the year and were #1 overall for both 2011 and 2012.

Robert Kirkman’s success and passionate advocacy for creator-owned comics led him to become the first person invited to become a partner at Image Comics since the company’s inception twenty years ago. Kirkman is the creator/writer of the Eisner Award-winning The Walking Dead, long-running Invincible, all-ages Super Dinosaur and Thief of Thieves. In 2010, Kirkman formed his own Image imprint, Skybound, which publishes his own work and Witch Doctor, Invincible Universe and Clone. Kirkman has earned the respect of the comic, writing and television communities and topped the New York Times bestseller list for graphic novels in 2011 and 2012. In April 2012, he took the top five spots on both the hardcover and paperback lists. He’s the creator/executive producer and writer of the hit Emmy®-winning television show, AMC’s The Walking Dead, the highest-rated basic cable drama of all time in the U.S, also an international success in 122 countries and 37 languages. Your destinations for all news and merchandise from Robert Kirkman, The Walking Dead and all Skybound titles are www.Skybound.com and www.TheWalkingDead.com.

Skybound is the home of Robert Kirkman’s creator-owned work including his Eisner Award-winning comic book series, The Walking Dead, long-running Invincible, all-ages Super Dinosaur, Thief of Thieves and Clone as well as Witch Doctor and Invincible Universe. Since its inception, Skybound has created television shows, merchandise and a wide spectrum of platforms, games (The Walking Dead: Assault iOS app), and entertainment events (The Walking Dead Escape). Skybound’s successes include the comic behind the hit Emmy®-winning television show, AMC’s The Walking Dead, the highest-rated basic cable drama of all time in the U.S, also an international success in 122 countries and 37 languages. Skybound/Kirkman frequently top the hardcover and paperback bestseller lists. Your destinations for all news and merchandise from Robert Kirkman, The Walking Dead and all Skybound titles are www.Skybound.com and www.TheWalkingDead.com.