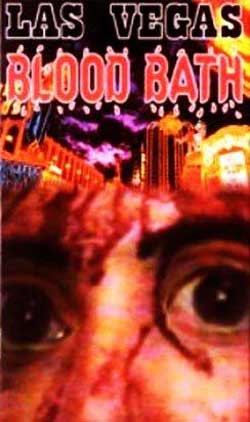 Las Vegas Bloodbath is a shot-on-video horror film directed, written and produced by David Schwartz, and released in 1989

When Sam Butler (Ari Levin) closes a big deal at work, he can’t wait to celebrate by spending some time with his wife. But when he gets home earlier than expected, he finds another man’s shoes in his hallway and that same undressed man in bed with his wife, Ruth (played by Elizabeth Anderson, who later would become a writer for family movies like The Little Mermaid 2 and Lassie, but here plays a very small role while wearing a wig that would later be made famous by Joe Dirt).

He picks up a gun from the floor and shoots them both, setting into motion a mental breakdown killing spree that finds him wandering around Las Vegas just looking for a woman to kill. If this sounds like a good way to spend the next sixty-seven minutes of your life, you are pretty much mistaken. Las Vegas Bloodbath is one part S.O.V. and two parts P.O.S., with a handful of decent special effects and a surprisingly interesting ending thrown in for good measure. 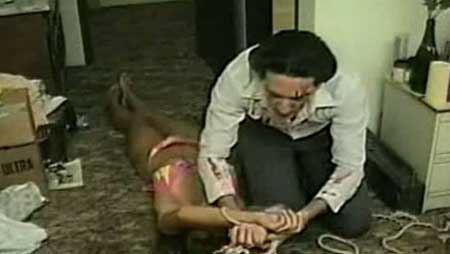 Amidst the cardboard actors (none of whom will be found in anything else, as far as I can see), the horrible dialogue full of puns and bad movie clichés, and numerous filler scenes is some semblance of a plot. After Sam kills his cheating wife and her new lover, he takes her decapitated head and goes on a killing spree of Las Vegas area women. In case we are wondering why, he spells it all out for us in a misguided, angry monologue while driving aimlessly through town: “All women are alike.

They don’t deserve to live.” He picks up a prostitute, berates her, then kills her in a Hitcher-like one car draw-and-quartering. He walks into a restaurant, sets his wife’s decaying head on the bar, and asks for a drink for each of them, then shoots the bartender and leaves immediately. Then he sees a car driving by with a “Beautiful Lady Oil Wrestlers” sign on the back and decides to follow and kill them, all the while making horrible puns, looking like Pee-Wee Herman with a Moonstruck-era Nicolas Cage hair-cut, and blaming his wife for making him kill. 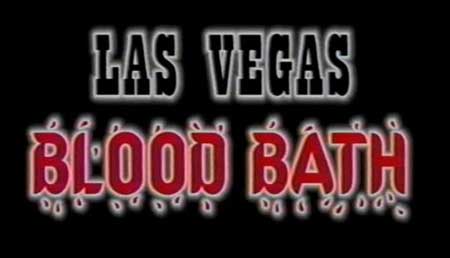 Writer and director David Schwartz (who only made one other movie before this called American Revenge) may have a disaster on his hands in Las Vegas Bloodbath, but he is hardly the only one to blame. ALL of the acting is bad. We’re talking one rushed take, stumbling and stuttering through the simplest lines bad. It feels like it takes forever to finish (which is bad seeing as, at a sixty-seven minute runtime, it is hardly a full-length movie), then once it’s over you realize very little actually happened. So much time is eaten up showing us Sam driving around Las Vegas, then even more time is wasted as we watch oil-wrestling ladies sit around at a baby-shower and stumble over their lines, then watch their friends on tv, then eat pizza, none of these scenes integral in any way to the flimsy plot.

However, as bad as Las Vegas Bloodbath is, we can see what Schwartz was trying to do with his second film, and for that he deserves at least a little credit. It’s obvious that he’s working with a shoestring budget, and seeing how the “actors” here were probably friends and co-workers it’s more than likely that they were working pro bono.

It seems that maybe the story could have used some outside assistance before he started filming. All that said, given the context, the effects in this movie are impressive. It’s not Hollywood quality, but some of the gore Schwartz is able to pull off is impressive. The decapitated head looks more real than goofy, a couple limb removals leave you surprised at their execution, and you’d imagine the gore-filled bathroom at the end probably cost the bulk of the entire film’s budget. 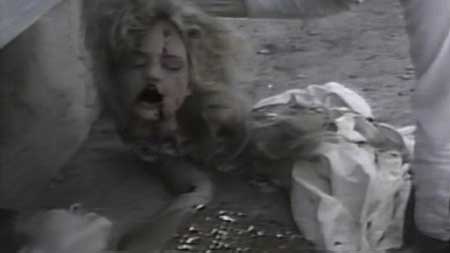 If this movie had been cut in half and made as a shot-on-video short, with all the filler scenes cut out and more time spent on the actors getting their lines down, I think we’d all be singing a different tune. The gore was there, as was the all-important desire and excitement to make a genre film. Unfortunately, as it stands, Las Vegas Bloodbath is a missed opportunity that feels like it goes on way too long. The fact that David Schwartz never went on to make another film after this is somewhat disappointing. It would have been interesting to see the result of his desire and beginner talent with gore effects being combined with better writing and acting.