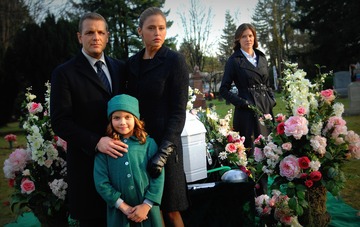 From writer/producer Roma Roth comes DANGEROUS INTUITION, a psychological thriller that explores the deep bond between a mother and her child and the phenomenon of mother’s intuition. The movie makes its world premiere on Saturday, May 11, 2013 at 8:00PM PT & ET

DANGEROUS INTUITION revolves around Kate Aldrich (Tricia Helfer), a successful career woman who is devastated when her husband leaves her for stay at home mom, Laura (Estella Warren) with whom she is forced to share joint custody of her daughter Izzy.

“DANGEROUS INTUITION will connect with a wide audience, from the working mom to the stay at home mother as well as the many women who have experienced mother’s intuition themselves. We had an incredibly talented cast and crew and had the pleasure of working with multiple academy award winner, Roger Christian who directed the film” said writer/producer Roma Roth. “I think every woman will be able to identify and root for Tricia Helfer’s character. I’ve been blessed to be able work with such skilled actors to help me bring this story to life. We are thrilled to be premiering Dangerous Intuition on Lifetime.”

As the story evolves, Kate begins to have intense premonitions that her daughter, Izzy (Genea Charpentier) is in danger, but everyone around her believes that she is simply a disgruntled ex-wife and attributes her terrifying visions to a relapse of the breakdown she suffered when her husband Dan (David Cubitt) left her. As the premonitions escalate Kate becomes convinced that Laura is a threat to her daughter.

Kate’s only confidant and ally is her attorney and long-time friend Hugh, played by Dylan Neal (BONES, 90210, RIZZOLI & ISLES) who tries to help her retain joint custody of her daughter, Izzy. But even Hugh begins to question Kate’s increasingly erratic behavior and as the visions escalate Kate begins to believe that maybe everyone is right – that is until she thinks she’s found evidence that leads her to believe that Laura may not be the perfect wife and mother after all.  But is Kate simply an overprotective mother or are her visions really premonitions?

“We were fortunate to have such a well written, original script and talented cast. DANGEROUS INTUITION is the perfect Mother’s Day movie,” said director Roger Christian. “Every mother will relate to the story as they all experience a psychic connection with their children and worry for their safety.”

The story will resonate with audiences worldwide because premonitions are a global phenomenon that men and women of all ages will be able to identify with.