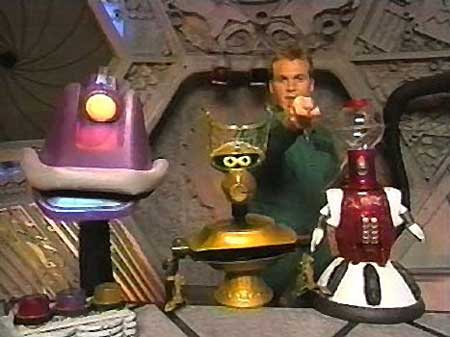 On November 24, 1988, we watched in horror and laughed out loud with Joel, Crow T. Robot, Gypsy, Tom Servo, and Cambot at such cinematic gems as Manos: The Hands Of Fate and The Brain That Wouldn’t Die.

This American cult television series kept us in stitches for almost twelve years on various networks. It first aired on KTMA in Minneapolis, Minnesota, then Comedy Central, and finally the Sci-Fi Channel until its cancellation in 1999. The golden egg of Joel Hodgson and production company Best Brains, Inc., MST3K ran for 197 episodes and one feature film.

The series plot was as absurd as all of the movies picked apart by the MST3K crew. In the not too distant future, two mad scientists (aren’t all mad scientists mad?), Dr. Clayton Forrester and his sidekick, Dr. Laurence Erhardt, launch Joel Robinson, a janitor working for Gizmonic Institute, into space and force him to watch horrible B-movies in order to measure how much bad movie watching it takes to drive a person crazy, and if that wasn’t mad enough, to also pinpoint the perfect B-movie to use as a weapon in Dr. Forrester’s scheme of world domination. 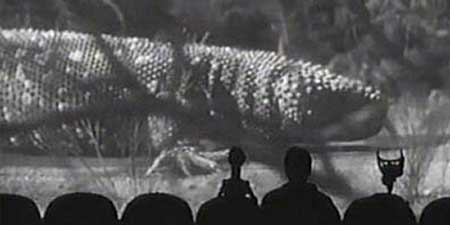 Trapped on board the Satellite of Love, best spaceship name besides the Enterprise, Joel builds four sentient robots. Gypsy, who steers the ship; Cambot, the recorder of the bad movies, Tom Servo, wise cracker extraordinaire; and Crow T. Robot, the best sidekick ever.

Joel has no control over when the movies start because he used those special parts to make his robot friends. Dr. Clayton Forrester, and later his evil mother Pearl, had various ways of punishing Joel, and later, Mike, for noncompliance such as shutting off the oxygen to the rest of the ship and electric shocks. Now I know you’re thinking, who’s Mike? Well, to those of you not fortunate enough to have watched the series, head writer Mike Nelson replaced creator Joel Hodgson as the only human on board the Satellite of Love.

Joel/Mike and the Bots were shown in Shadowrama as if they were sitting in the front row of a dark theatre. To keep from going mad (wouldn’t you?), they ‘riff’ on the movies. Riffing was the term used to describe the mocking and wise cracking by Joel/Mike and the Bots. 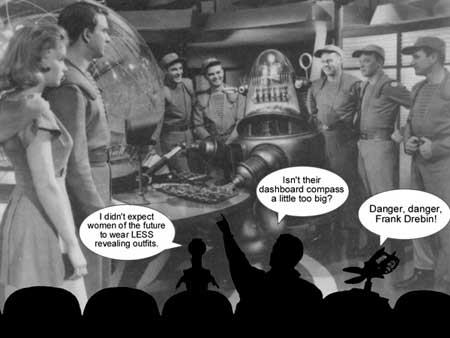 The movies (using term loosely) were incredibly bad. In addition to “The Brain That Wouldn’t Die” other notables were The Incredibly Strange Creatures Who Stopped Living and Became Mixed-Up Zombies (so serious, stop laughing), “Warrior of the Lost World”, “Jan in the Pan”, and Revenge of the Mysterons from Mars.

Movies weren’t the only targets, unintentionally humorous ‘shorts’ like educational films from the 1940s and 1960s, Chevrolet’s training film for managers, and films intended to teach children about posture and personal hygiene, and my favorite, 1960s snippets of the soap opera General Hospital were fair game.

The show’s ship, the Satellite of Love, is a reference to the Lou Reed song, and Joel Robinson’s name is a reference to the 1960s television series Lost in Space, The Swiss Family Robinson, and Robinson Crusoe. The show’s main antagonist, Dr. Clayton Forrester, is named after the main character in The War of the Worlds. If you liked that last reference, check out my first column. (Shameless plug…..I know.)

After The Comedy Channel and rival cable network HA! merged to become Comedy Central, the newly combined network ran a 30-hour marathon of previous MST3K episodes hosted by Pen Jillette that featured a behind the scenes look at episode scripting, filming, voicing, and puppet construction. In the last and seventh season on Comedy Central, Dr. Forrester detached the Satellite of Love from Deep 13 after his funding ran out, sending the satellite adrift in space. Eventually they reached the edge of the Universe and become entities of pure consciousness. 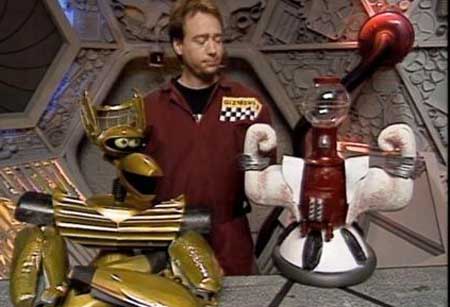 If you’re wondering why this perfect television show isn’t being shown today, it’s because the rights of the various ‘movies’ shown on MST3K reverted back to the original owners who were more than a little pissed at the ‘riffs’ on their movies. So without the rights kiddies, we can’t watch. But don’t you worry, the series philosophy of “Keep Circulating the Tapes” has led to it being heavily circulated on the web. Now, “Push the Button, Frank.” 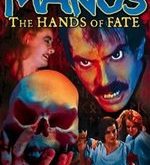