I’m kinda looking forward to this one. As I have mentioned before, I’m a huge fan of disaster movies and I love the fact that Eli Roth has married that with what appears to be a balls out gore flick.

AFTERSHOCK is hitting theaters on May 10th but it appears to be a very limited release but I’m hopeful that it might get a showing somewhere near. Roth stars and he also co-wrote the script along with director Nicolás López and it tells the tale of a group of folks who survive a horrible earthquake only to become hunted by a band of uber-violent fugitives who escape when the prison they were being held in is demolished during the quake. 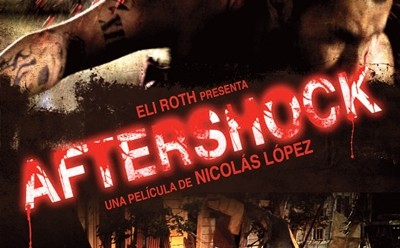