A press release showed up today and in it was our first official word on what the eighth and final season of DEXTER may hold for us. While the info is still vague at best, at least it is some kind of acknowledgement of some sort of direction.

“Dexter” stars Michael C. Hall in his Golden Globe and SAG Award-winning role as Dexter Morgan, a complicated and conflicted blood-spatter expert for the Miami police department. Season Eight begins six months after LaGuerta’s murder – and Dexter is still managing life as a dad, brother, and serial killer. As Deb (series star Jennifer Carpenter) struggles to deal with the consequences of her actions, a mysterious woman comes to work with Miami Metro, offering first-hand information on Dexter’s past.

The series also stars Desmond Harrington, C.S. Lee, Aimee Garcia, David Zayas, Geoff Pierson, and James Remar. “Dexter” is tied as the No. 1 rated series on Showtime along with “Homeland,” watched by 6.2 million weekly viewers across platforms in its seventh season, its highest-rated yet. The Season Seven finale attracted 7.24 million viewers in the finale week, the series highest total week ever.

The press release also brought another gift, a video of DEXTER EXCUSES compiled through the years. Pretty awesome stuff but I can’t help but notice that the official serial killer excuse of choice is missing and that of course is “I need to return some video tapes.”

I can never pass an opportunity to post an AMERICAN PSYCHO reference. 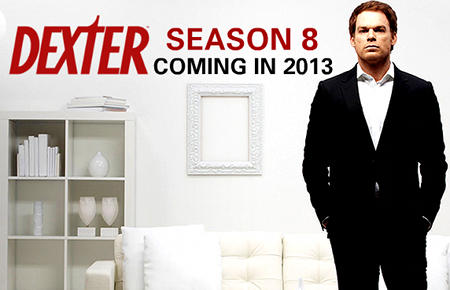