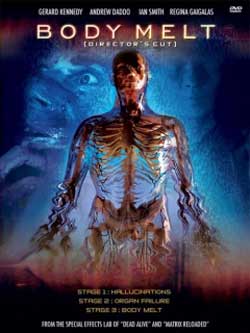 If you were to mix the face melting scene from the end of Raiders of the Lost Ark, the poisonous revelations of Super Size Me, and a couple drops of David Cronenberg’s adrenaline in a big bowl, then sprinkle in a large helping of Ozploitation and stir chaotically for eighty-one minutes, you’d have Body Melt. And believe me, you could do much, much worse for yourself. This movie is a must for any fans of Pater Jackson’s early (and in my opinion, better) works like Bad Taste or Dead Alive (aka Brain Dead). It’s a perfect mix of splatter, gore, funny, and bizarre, with an underlying social commentary and plenty of fun, early 1990’s special effects. 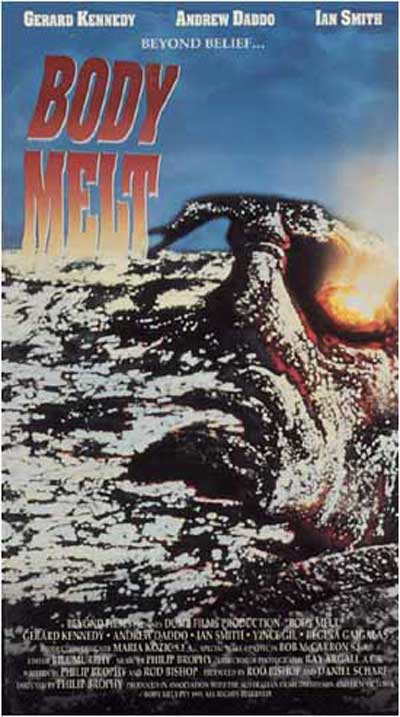 Directed by Philip Brophy (more known for his founding role in the 1970’s experimental music group Tsk Tsk Tsk, this is unfortunately the only full length movie he has yet directed), Body Melt is the story of a small subdivision unknowingly being used as guinea pigs by a pharmaceutical company called Vimuville to test the results of their new drug. However, not all of the Vimuville workers agree with this approach, and one of them, Ryan Brennan (played by Robert Simper, also from Mad Max Beyond Thunderdome, The Howling III, and even Mighty Morphin Power Rangers: The Movie), decides to go to Pebbles Court, Homesville and let the residents know what’s been going on. His plan is discovered, and unbeknownst to him, he is injected with the drug before his trip begins, setting into motion the events that make up our beautifully hallucinogenic gorefest. 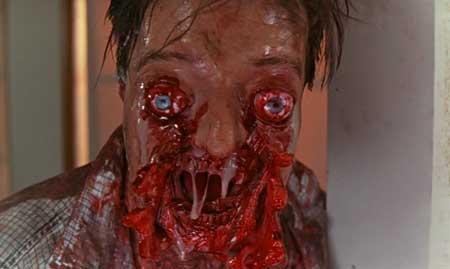 It is important to remember how the drug is affecting people: “The first phase is hallucinogenic, the second phase is glandular, and the third phase is body melt.” This is not only the tagline of the film, but it is a hint to what we are about to witness as Brennan speeds across the country toward the unfortunate subdivision. He starts seeing things, sweating profusely, and choking. He stops at a gas station and drinks some laundry detergent. His throat splits open as he speeds down the highway, police chasing what they believe is a joyriding speeder. He finally reaches Pebbles Court, but by this time the third phase of the drug has begun and we see his face melting and tentacles ripping out of his throat as he crashes into a van, flies through his windshield, and dies in front of a stunned crowd of neighborly onlookers. While a couple of detectives begin investigating who this man is and what has happened to him, we are treated to the fates of the rest of the neighborhood. 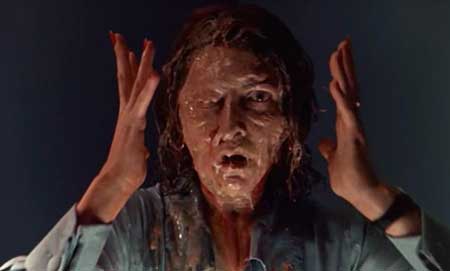 The movie goes in a ton of directions at once, making it hard to succinctly explain, but very fun to watch. The detectives search for clues and question the neighbors. Back at Vimuville, Shaan (Regina Gaigalas) and Dr Carrera (Ian Smith) debate the nest steps to be taken now that one of their own test subjects is in the hands of the law. One man begins having hallucinations of a sometimes deformed/sometimes seductive woman. A new to the neighborhood couple is expecting a baby and hopes for the best. A family of four are notified that they have won a “dream vacation” to a health spa. And in a very Mother’s Day meets Sheitan side story, two horny young men go on a cross-country trip to donate sperm and meet who they think is a sexy doctor, but get lost and stop at a service station run by Pud (played by none other than Vincent Gil, Nightrider from Mad Max) and his incestuously deformed and even stranger acting family. None of these individual stories end well, but they offer plenty of laughs and hearty splashes of blood.

Sure, there are probably too many things all going on at once, too many storylines to bring any of these characters any closer to our hearts. And sure, there is plenty in Body Melt that simply makes no sense. But where else do you get exploding erections, melting faces, killer placentas, and weird mutant looking kids killing a kangaroo with a rock from about one thousand feet and then eating its adrenal gland? Nowhere I can think of (and if you know of another option, let me know). 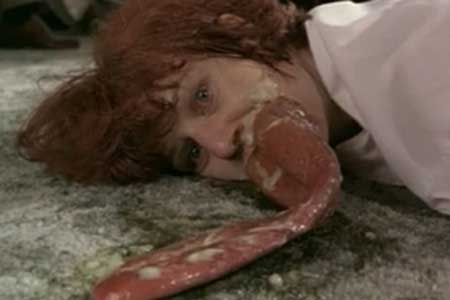 Body Melt is pure fun. Aside from a couple appearances in the Mad Max movies or bit parts here and there, none of the actors are known in any capacity to mainstream American audiences. In fact, most of them are regulars on popular Australian television programs. But they all do just fine throughout, no one necessarily shining through, but no weak links either. The story is great (albeit a bit bipolar at times), the look of the film is great (lots of great green slime and no out of place CGI to ruin the feel), and it really is funny. Not to mention the end, which is two parts hilarious and one big part ominous in a Cabin Fever, we’re all going to die kind of way. Leaves me wishing Brophy had other full-length movies out there, but unfortunately there are only a couple pre-Body Melt short films floating around out there. I can’t recommend this one enough, and I give it two chemically enhanced, mutated thumbs up.