Home | Our First Look At The Final Season Of DEXTER

Our First Look At The Final Season Of DEXTER

With the confirmation that this coming season of DEXTER will be the last the rumors are already starting to spin as to how it will all end and even a notion of a possible DEB related spin off. All very cool things. I’m saddened by the fact that Dexter will cease to be after the the upcoming episodes but it had to be. There was no way they could continue things much longer, expecaally with Deb now knowing what her brother is.

Tonight I have our first look at the final season, a teaser that kind of sets the tone for what we can expect this comings season.

Those fine folks over at THR also took the time to sit down with SHOWTIME honcho David Nevins and got down and dirty with the main man about some of the pressing questions when it comes to DEX.
When asked about his input into how things end for America’s favorite serial killer he states: The creative is being fundamentally driven by [showrunner] Scott Buck and John Goldwyn, Sara Colleton, and Michael C. Hall. They’ve been the bedrock of this show and this character since the beginning… They have an amazing and fitting end in store.

When asked about any hints on how things will work out for DEXTER: The consequences are already starting to hit him. It’s jeopardized his most important relationship on Earth, which is with his sister; his other relationships on the show will be touched this year, and he’s still changing… We saw a big change last year in that it wasn’t so driven by one big antagonist… “Dexter” changed its formula last year and will change again this year — there’s a lot of different things in play. Part of what you need to do in a finale is start bringing some of the different threads together: his sister, his son, his love life, his professional life, and his childhood trauma.

And last but certainly not least, what about that rumored DEB spinoff, he says: All options are on the table as to where it could go after this. There’s nothing actively happening, but you never know what the future holds. We need to get through this season and see how the dust settles and then see where we go from there. I won’t rule it out, but I’m not actively planning anything.

We’re gonna miss ya Dex. Can’t wait to see how they play it all out. 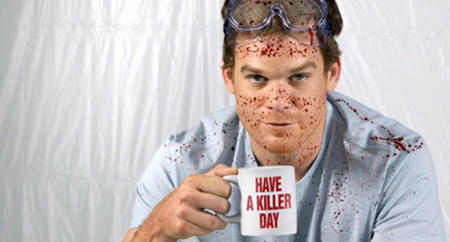