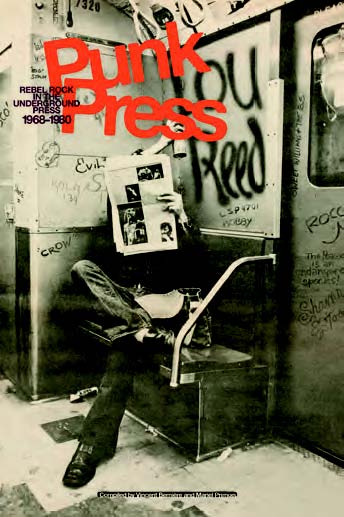 I still remember the era when punk was the new up and coming trend. One that you might see featured in magazine about style and changes in the music screen. There wasn’t alot on the market to read in the way of books but you could always dig out a few magazines from local book sellers who featured a wide variety of magazine selections. “Punk Press” pays homage to these mags, the often fan-created reads that were far removed from any professional printing press. It was an era of copier-machine magazines, white out, and cut and paste photo inclusions. Heck, many of the entries were even hand-written capturing a certain primitive essence that matched the culture they were covering.

The book proclaims coverage of reads during the 1968-1980 era, still WAY before digital was a norm and Photoshop was affordable enough to be acquired. Talent included ranges the gamut but favors the more popular trendy acts of this era. The Ramones, The Sex Pistols, Iggy Pop, Eater, The Dead Kennedys, Patti Smith, Buzzc**ks, and The Clash are just a few of the re-occuring talents featured within. Though fans will also find a number of lesser-known acts that either rose to the top or disappeared into obscurity.

This volume doesn’t have alot in the way of reading, but is a highly visual journey using covers, insides and various retro media of a day and age long past. This styles presented are art forms in themselves using a combination of hand drawings, cutout letters, hand typed (typewriter) articles, sharpie markers, collage, paper mache, handwritten editorials, cartoons and various forms of animation scribblings.

Magazines featured include (but not limited to): Search and Destroy, New York Rocker, Los Angeles Flipside, Bomp, Slash, Zigzag, Chainsaw, Rock News, In the City, Facade, and East Village Eye. And that is just to name a few!

Punk fans (if that is even what you are calling yourself these days) are gonna love this early look into the past. The magazines featured have style and a primitive ambience that just isn’t seen anymore (or bothered with).

“Punk Press” also contains an “end section” that serves as the book’s main narrative (to follow the art). Each previous inclusion in the book is commented here with some historical guidance on publication and the contents within. Bands featured were often repeated in this era demonstrating the few well know acts from the times.

Authors Vincent Bernière and Mariel Primois have truly revived some of the great offerings from a special time in music history. Fans can now relive the past in a collected visual presentation that does the trend great justice!