Fear of Being LOCKED IN A ROOM – Horror Thriller Gets Release 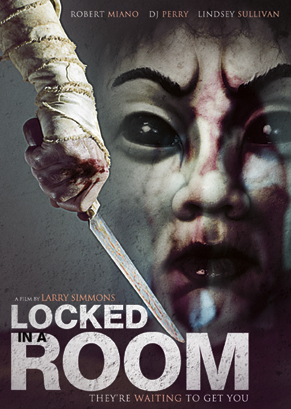 At Risk Entertainment in association with Collective Development Inc. just released their first collaboration “Locked in a Room” on March 7th. The horror thriller has domestic distribution with Echo Bridge Entertainment who also handles much of Lionsgate & Miramax’s home video library. The film was written, produced and directed by Larry Simmons.

Additionally the film was produced by DJ Perry, Phylliss Larrymore-Kelly and Gordon Djordjevski. and Larry Simmons. The film stars Robert Miano, DJ Perry, Lindsey Sullivan, Carlucci Weyant and Rae’Ven Larrymore Kelly. The film in a test run shot to #12 spot on Google Play and other outlets like Amazon, Blockbuster, itunes, vudu will be carrying the film.

The film is about a family of siblings captured and held for a reason that slowly becomes known to audiences. Hardened detectives, masked kidnappers and crooked attorney’s all play into an intricate weaving that will have audiences guessing right to the end. The film enjoyed a limited theatrical run with Rocky Mountain Pictures prior to signing their domestic deal.