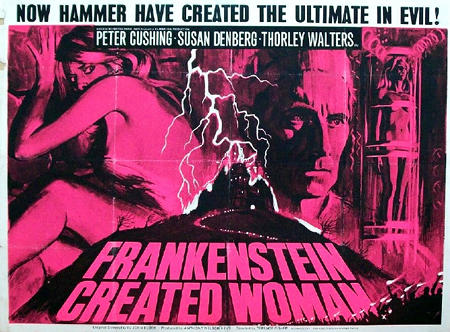 The press release reveals all:

Millennium Entertainment announced today that they will distribute titles from Exclusive Media’s Hammer library in the U.S. Established in 1934, Hammer is a groundbreaking feature film production company that was instrumental in creating the horror genre and which recently diversified into publishing, live theatre and live attractions.

Stated Steve Nickerson, President of Millennium Entertainment: “Hammer is one of the most renowned and beloved film brands in the world and we are thrilled to bring the Hammer Films library to U.S. fans.”

With this new distribution deal, classics such as Dracula: Prince of Darkness and Frankenstein Created Woman will be made available to the public in new configurations for the first time in almost 10 years. With a multi-tiered approach, a full release schedule is planned to both introduce the Hammer Horror brand to a new audience not familiar with the classic line and provide high end, limited edition Blu-rays and Collector’s Sets to the loyal horror fan over the next several years.

Launching with the April 2nd DVD release of the “Hammer Horror 3 Feature Film Set,” this unique collection of classic Hammer films is offered at an affordable price to encourage the general public to join the Hammer fanbase. The set is headlined by Hammer stars Christopher Lee (The Lords of the Rings trilogy and the new Hobbit trilogy) in Dracula: Prince of Darkness (1966), as well as Peter Cushing (Star Wars) in The Legend of the Seven Golden Vampires (1974) and Frankenstein Created Woman (1967).

“We are really pleased to be in business with Millennium to bring the newly restored titles from our library to the United States in HD for the first time,” said Peter Naish, Senior VP, Distribution, Hammer. “Alongside the new extras we have created, we hope that our American Hammer fans will love the Blu-Ray collector’s editions and that these editions will also help new fans discover our rich history.”

More about the “Hammer Horror 3 Feature Film” 2 DVD set:
Dracula: Prince of Darkness (1966) – Christopher Lee reprises his role as Count Dracula in this 1966 sequel to the original Horror of Dracula.
The Legend of the Seven Golden Vampires (1974) – Professor Lawrence Van Helsing and his son quest to find the seven lost “Golden Vampires.” With the help of a guide and his kung-fu trained siblings, they set out to uncover the truth behind the deadly legend.
Frankenstein Created Woman (1967) – A young girl jumps to her death (Susan Denberg) after her lover is framed for murder and wrongly executed. Baron Victor Frankenstein (Peter Cushing) places her lover’s soul into her recently deceased body is able to create a new woman, whose soul longs for revenge.