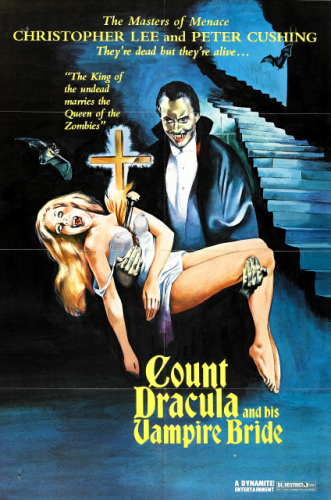 SYNOPSIS:
“In London in the seventies, Scotland Yard police investigators think they have uncovered a case of vampirism. They call in an expert vampire researcher named Van Helsing (a descendant of the great vampire-hunter himself, no less) to help them put a stop to these hideous crimes. It becomes apparent that the culprit is Count Dracula himself, disguised as a reclusive property developer, but secretly plotting to unleash a fatal virus upon the world.” (courtesy of IMDB)

REVIEW:
Count Dracula may be immortal, but the sun was bound to rise on the long-running Hammer series of Dracula films starring Christopher Lee, the most recognisable incarnation of Count Dracula second only to Bela Lugosi. And sunrise came not a moment too soon, since this week’s film is one of the most laughable attempts to update a horror character to the present day. So consider yourself warned: This film really sucks, but not the way a Dracula movie should.

The Satanic Rites Of Dracula (1973), also known by the more cumbersome title Count Dracula And His Vampire Bride, begins where Dracula AD 1972 (1972) finishes, but where that earlier film was a largely conventional vampire story made modern only by Dracula’s victims, Satanic Rites transforms the ancient vampire into a scheming latter-day super-villain. He has henchmen who kill, kidnap and ride around on motorcycles, a mystical oriental women, deadly serums, colluding heads of industry, a future-retro control room, and even ex-Bond girl Joanna Lumley as fangbait. Perhaps this should have been called The Man With The Pointy Teeth. Come to think of it, with a basement full of brides that should be The Mormon With The Pointy Teeth. I wonder what the prenuptial agreement looked like?

This is Christopher Lee’s eighth and last appearance as the bloodsucker, as believing that the presentation of the character had seriously deteriorated he refused to don the cape ever again for Hammer. However, he was happy to send himself up in the French comedy Dracula Father And Son (1976), and he sported a rather nice brown and black ensemble as fangless Count Dooku in two of the three Star Wars prequels. For an immortal creature of the night, he’s aged quite a bit. I worked with Lee as his double on the Italian horror film Castle Of The Walking Dead (1967), following his death at the hands of Tarzan himself, Lex Barker. Do your own stunts next time, Chris.

Peter Cushing reprises his role as Lorrimar Van Helsing, member of a family whose men are all born at the age of seventy, who he played once more in Hammer’s ninth and last Dracula film, the Kung-Fu extravaganza The Legend Of The Seven Golden Vampires (1974), also know as The Seven Brothers And One Sister Meet Dracula. He then moved into other, less serious film work. Like it’s predecessor Dracula AD 1972, The Satanic Rites Of Dracula was the work of Canadian Alan Gibson, and very dodgy work it is too, with a screenplay penned by Doctor Who veteran Don Houghton, which explains the science fiction elements. 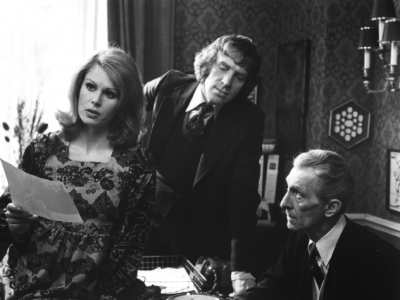 1. Wooden stake through the heart. The classic means of vampire dispatch, it’s lucky for our heroes that Dracula’s basement is full of loose lumber and his estate comes with a rickety paling fence ideal for…impaling.

3. Sunlight. This has always made vampires approximately fifty percent less scary than they could be.

4. The sign of the cross. It doesn’t even have to be a proper crucifix or anything, just two vaguely straight things held perpendicular will do. Of course, this won’t kill a vampire, but it does make them cower behind their hands, giving you the chance to run like hell. Take it.

6. Running water. That evil creatures can’t cross naturally running water is an old European belief, and it was used well in Dracula, Prince Of Darkness, but used badly here when extended to include indoor plumbing. Naturally, our Count has observed safety regulations and installed a sprinkler system.

7. Fire. It wouldn’t really be a Hammer film if a house didn’t catch on fire at the end. Despite the sprinkler system.

8. Prickly bushes. No, really. Because Jesus wore a crown of thorns, prickly bushes can hurt Dracula. So if you see a vampire, which will be a lot since there are more films about Dracula than Jesus, remember to get your prickly bushes out.

Given the list of vampire weaknesses, it’s pretty impressive that Dracula survived until 1974. It turns out the one thing that kills vampires for good, however, is really bad movie-making. Half of this movie is shot from behind various lighting fixtures. Did the cinematographer have some vision impairment that made him incapable of telling when a lampshade was in the way of his shutter? There’s also an early scene where apparently they had someone about three feet tall fill in for the cameraman. I’m sure I learned everything I wanted to know about the interior of the average British actor’s nose during that scene. 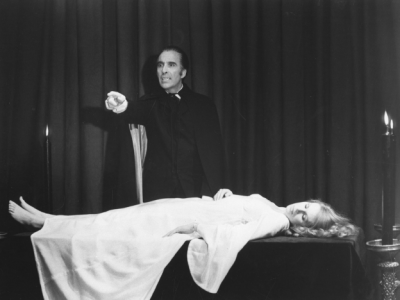 Other things you may not want to know about this film include the fact that it was almost called Dracula Is Dead And Well And Living In London, but sanity prevailed – sort of. It was also the very first flick to feature a bare-breasted staking, which probably explains why it’s release was delayed five years in the US. It had the only thing, or should I say two things, more frightening to an American audience than impalings, flesh-eating diseases and the supernatural combined. 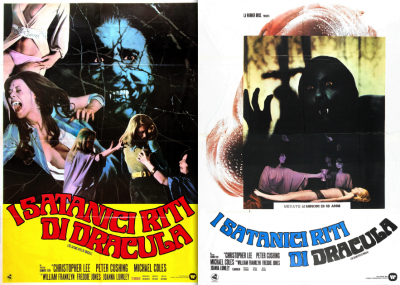