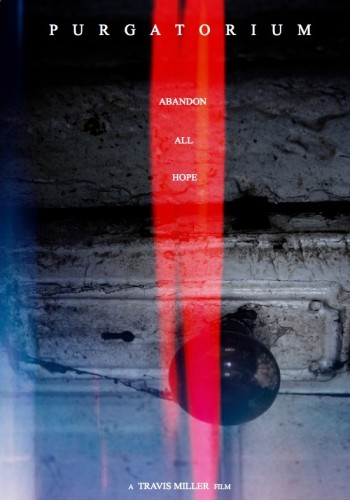 In this Twilight Zone-esque thriller by director Travis B. Miller, five strangers awake in an abandon two-story house with a few unanswered questions racing through their minds. Who are they? Where are they? Why are they there? They soon discover that the obvious answers are not always the right ones. With nerves stretched thin, and time closing in, those remaining realize that if they want to escape from the forsaken place, they will have to work together to solve the puzzle, taking them on a psychological maze of murder and mayhem that is Purgatorium.

For those of you who faithfully follow my rambling reviews for HorrorNews (thanks again Timmy and Bill), you’ve become aware that I enjoy injecting as much cultural education into my 1,000 words as I possibly can without annoying the powers that be or alienating Timmy and Bill.  At the risk of failing in both respects:

In 1944, existentialist playwright Jean-Paul Sartre penned the classic “No Exit,” which has been translated into nearly every language known to man and performed under several different titles.  The play concerns three unconnected individuals trapped within a nondescript room, knowing nothing of their situation except for the simple fact that they all have died after leading unseemly and miserable lives.  Are they awaiting an afterlife of punishment and torture to be revealed later, or have they already arrived there, doomed to spend eternity getting on one another’s fraying nerves?  It remains one of my favorite pieces of theatrical mastery, originating the famous and oft-quoted line, “Hell is other people.” 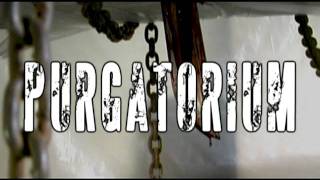 What for the love of Buddha does some dead French dude’s pretentious posturings have to do with anything?  Bear with me, friends, and I’ll inform you.  Over the years, the horror and science fiction genres have replicated this basic premise so many times over, I could fill this entire link with examples before even getting around to the damn review.  A 1961 Twilight Zone episode entitled “Five Characters In Search of An Exit” was a direct descendant of Sartre’s original vision, and the second and fifth installments of the “Saw” series also owe a small debt of gratitude.  The crafty 2003 thriller “Identity” aped “No Exit” with a dash of Agatha Christie’s novel “And Then There Were None” (or, “Ten Little Indians”),  which itself borrowed elements from our subject as well.

The formula is revived once again in writer/director Travis Miller’s “Purgatorium,” a film that both astounded me in its low-tech wizardry and made me yearn to hurl heavy objects at the screen.  At times, these two sentiments occurred simultaneously, colliding in a brutal cage brawl within my skull. Unabashedly artful and boasting a dreamlike atmosphere that would have the likes of Lynch and Truffaut applauding, it’s nearly an impossibility to accept that this film was made for a minuscule $10,000.  That is, until the actors open their mouths.  Then all bets are off, and the tiny budget suddenly sounds perfectly feasible.

Awakening within a home reminiscent of Miss Havisham’s depressing “Great Expectations” digs, five individuals rise to find their memories erased of how they got there and also discover that there is . . . wait for it . . . no exit.  Initially distrustful of one another and retracing their steps back to the last recollections they can conjure before landing themselves in this current predicament, “Purgatorium” weaves through flashbacks and hallucinated images in the present with grace and style.  All serve as important and subtle foreshadowing to the rhyme and reason behind everything, never once beating the audience over the head with the “Hey dummy, this is a clue!” hammer.  Though unnecessarily chatty once the twisty plot kicks in, the presentation alone is enough to keep one riveted.

Soon events take a darker turn, and our protagonists being dying at the hands of the home’s malevolent entities, their bodies vanishing from sight of the others.  Prima donna Meredith (Jamie Lee Fife) meets her violent fate through a whispering apparition in the bathroom, and her boyfriend Romney (David Schwimmer lookalike Jeremy Castaldo, who also wrote and performed the original music) soon follows suit via an eerie film projector in a bizarre moment that’s straight out of “Lost Highway.”  Unraveling the mystery is soon left to Abby and Adam (Libby Chancellor and Joshua Miller), whose pasts slowly begin to intertwine as memories start to vividly resurface.

Despite the occasionally meddling score (someone needed to inform Castaldo less is more when capturing mood), “Purgatorium” is a tight little technical marvel, and one cannot proudly shower enough accolades on what Travis Miller has accomplished here.  Unfortunately, I refuse allowing myself to praise the film as highly as I would like, based squarely upon the mind-numbingly wooden dialogue and sheer amateur garbage that I can barely describe as “performances.”  Like other existential works of film, the actual words spoken is secondary to overall ambiance, but choking down lines such as “I think we’re here for a reason” (uttered not once, but twice) will not be tolerated.  Perhaps if delivered by thespians of any paltry caliber whatsoever, Miller’s obvious tin ear could have gotten away with these writing atrocities.  Are these independent film makers honestly that impressed by a pretty face who can afford the hundred bucks for glossies?  Granted, most of the cast seems to be related to Miller in some way, shape or form, but that is no excuse.  I assume Oklahoma (where it was shot) has community theatres which can be scouted for some semblance of acting talent.  Perhaps I’m being presumptuous, and there were no such playhouses to draw from.  After all, it is Oklahoma.

Anyone with a rudimentary knowledge of “No Exit” (which you should have by now, and you’re welcome) or any of its many incarnations knows where this is leading, and “Purgatorium” never attempts to conceal the purpose of its inescapable domicile or the lost souls within its walls.  The how and why is the driving force behind it all, and it delivers in spades in that respect.  The finale is a tad overwrought and stretches the budget constraints to the point of finally showing at the seams, but it leads to a satisfactory and unexpected conclusion that brings everything full circle whilst avoiding the obnoxious narrative urge to tidy up all the dusty bric-a-brac along the way.  If only I didn’t walk away with a splitting headache induced by performances and dialogue the Lifetime Movie Network would be too humiliated by to air.  Miller earns himself my award for “Director I’d Most Like to See Tackle a Silent Picture,” if not my effusive adoration.  Pity.  He was so close.