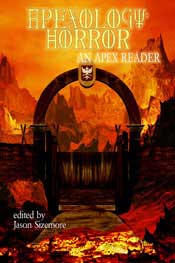 1. The study of literature-based artifacts left by the authors and editors of Apex Publications, particularly dark or horrific stories.
2. An anthology of horror containing disturbing, dark imagery and twisted fiction.
Contained within are twenty-one stories to showcase the unique talents that Apex has published and employed in the past five years. Apexology: Horror contains work from two Campbell Award winners, a Hollywood screenwriter, a NYT Bestselling Author, Nebula and Hugo nominees, Stoker Award winners, and Mari Adkins!

Get a taste of some of the best Apex has to offer. Study Apexology: Horror.

This is a digital only release!

TABLE OF CONTENTS
Introduction: Five Years and Counting by Jason Sizemore
“It Tasted Like the Sea” by Paul Jessup
“Summon, Bind, Banish” by Nick Mamatas
“To Every Thing There is a Season” by Dru Pagliassotti
“Life’s a Beach” by Alethea Kontis and Ariell Branson
“Kusatenda Uroyi” by Gill Ainsworth
“Lottery” by Gene O’Neill
“Cerbo en Vitra ujo” by Mary Robinette Kowal
“The Spider in the Hairdo” by Michael A. Burstein
“The Dark Side” by Guy Hasson
“With the Beating of their Wings” by Martel Sardina
“Enough to Make a Devil” by R. Thomas Riley
“Flash of Light” by Jason Sizemore
“Transylvania Mission” by Lavie Tidhar
“Inside Looking Out (or: Falling Through the Worlds)” by Mari Adkins
“Powered” by Deb Taber
“Disturbing Things” by B.J. Burrow
“Eulogy for Muffin” by Jennifer Brozek
“Hands of Heritage” by Elizabeth Engstrom
“The Junkyard God” by M. Zak Anwar and O.M.R. Anwar
“Bessie Green’s Thumb” by Fran Friel
“Big Sister/Little Sister” by Jennifer Pelland

About the Editor:
Jason Sizemore is the owner and operator of Apex Publications. He also writes and edits, earning a Bram Stoker Award nomination for his first book, Aegri Somnia. He’s seen over thirty short stories published and four anthologies.