Film Review: The Alien Time Machine – Encounters from another Dimension 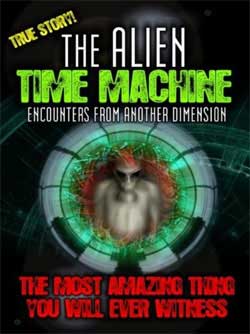 Join Eerie Investigations, Karen Frandsen, as she explores the mysterious experiences of author, Terry Le Riche Walters. Terry’s amazing personal accounts of alien visitations, abductions and spiritual prophecies from other dimensions are profound and riveting. Take an amazing trip, see the world’s only real Time Machine built inside a small house in Bath, England using alien technology. This film features exclusive and unique footage of the actual machine and a group of researchers gathered to discuss it’s use and the bizarre technology behind it. Looking amazingly like something from a Dr. Who set, this incredible machine seems to somehow alter the laws of physics, time and space.

An intriguing title for lovers of UFO hearsay and research. The DVD is broken up into 4 sections, the 2nd is actually the content. The other 2 are advertisements and then there is an interview with a musician on the 4th.

The brunt of the content is an exclusive interview with author Terry Le Riche Walters per Eerie investigations Karen Frandsen. This hour long interview is done shot from one static camera which never moves the entire show. The interview is broken up with 3D inserts which reminded me of stuff that was created in the 80’s. Though the main focus  here is what Terry has to say and his conviction on the subject. In short,  he tells a tale of when he was taken into a craft or building that looked like a craft and was examined by aliens. We get that they were some sense of the word but in short more human than Greys.

This experience as stayed with him is lifetime and as an adult wants to disclose the event for the documentary. He goes on to reveal perhaps some more spiritual prophecies he had over is life and tells us that his father revisited aliens every week. By all accounts, Terry seems like an intelligent educated man rather than someone who was hallucinating. Though the reports seem muddled by earlier years that maybe could have been mistaken for something else. His intent is not of sensationalism so we get that he is just trying to be honest. I really though didn’t come away from the interview with a firm sense of what he was talking about. I suppose his books might be more clarified to the experience. The interview features some footage at the 50 min mark of a group of folks who are discussing some sort of time travel device. The audio is hard to make out and features subtitles thru the first minute of this segment. After that they just kind of stop showing up. While I have no way of disproving the device they have made, I have studied a bit of time travel research books and the device on this program looked more like an elaborate decoration. Or perhaps a museum piece created for entertainment.

In all the conversation was interesting but the footage will put you to sleep after a half hour as it never moves,which means there is no dynamic in the footage. I still think UFO enthusiasts will enjoy the content of what is disclosed.