Think what you will of Eli Roth there is no denying the fact that the dude is a driving force in the horror genre. His latest en devour is a film title THE GREEN INFERNO and this morning the first still from the project has crawled on line.

Starring Lorenza Izzo, Ariel Levy, Aaron Burns, Daryl Sabara, Kirby Bliss Blanton, Magda Apanowicz, and Sky Ferreria the film tells the tale of “A group of student activists from New York City travel to the Amazon to protect a dying tribe, but crash in the jungle and are taken hostage by the very natives they saved.” 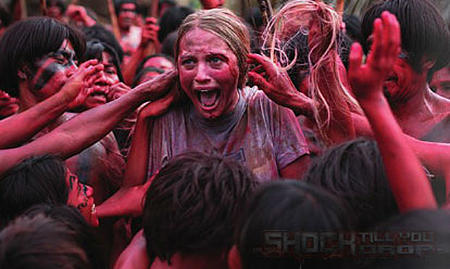