Below you can checkout the first photos for Escape From Vampire Island, a brand new live-action horror movie based on the best-selling manga series by Koji Matsumoto, coming to DVD and Blu-ray in the UK on October 4th. No word on when we will get it on this side of the pond. 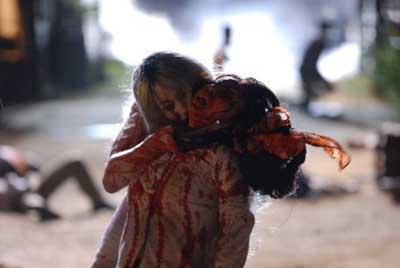 Two years after his older brother, Atsushi, goes missing under mysterious circumstances, Akira meets a beautiful young woman, Rei, who is in possession of Atsushi’s ID card and claims he is still alive and can be found on the remote, uncharted Japanese island of Higanjima. Desperate to see his brother once again and to solve the riddle of his disappearance, Akira talks several of his friends into joining him on a trip to the island in search of Atsushi.

Arriving in Higanjima on a small boat piloted by Rei, the friends are shocked to learn that they have been lured there as fodder for the island’s inhabitants, a race of extremely bloodthirsty vampires ruled by their ancient but well-preserved leader, Masa. As the vampires begin to descend upon their newly arrived prey, Akira makes a startling discovery – Atsushi really is alive and on the island, having devoted himself to becoming a vampire hunter intent on slaying Masa’s legions of the undead. Finally reunited, the two brothers and their friends join forces with two simple goals in mind – rid Higanjima of its entire vampire population and find a way to escape from the island without being bitten in the process!