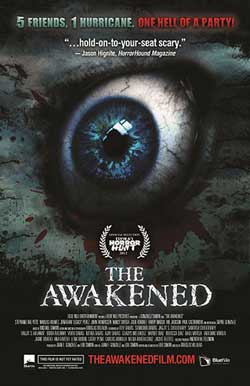 A category three hurricane is headed straight to Miami. Five friends decide to have a hurricane party to weather the storm. They close the doors and the hurricane shutters and are locked inside for the night. After a while, they grow weary of playing drinking games. That’s when they decide to recreate a spiritual healing that they saw a gypsy perform some weeks before. But something happens during the healing. As the electricity starts failing due to the storm, strange things start happening. But is it the storm causing those noises or something else? As time passes, they start dying — one by one. Could one of them be doing this or is there something else inside the house with them? Trapped inside the house until the storm passes, will any of them make it through the night?

The premise for The Awakened is a pretty simple one. A few friends are locking themselves in for a party as a hurricane passes through Miami. These friends will be walking clichés from films gone by and the nastiness when it happens will turn out to be pretty formulaic. All this presumption may actually be somewhat correct, but writers Juan F Gonzalez and Lou Simon have actually come up with a decent idea.

The film starts with the above mentioned friends arriving at a house they believe to be owned by the parents of the host Manny (Jonathon “Legacy” Perez – should nicknames really in included in the credits?). Although this isn’t actually legit yet as Manny’s parents have yet to complete the sale and for all intents and purposes the party is simply trespassing with refreshments. 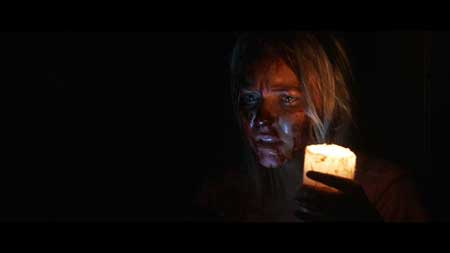 The other guests include close friend Kevin (John J Thomassen) who is immediately unlikeable, his girlfriend Laura (Nancy Sayegh) who had a one night stand with Manny, her sickly friend Gina (Stephanie Pitts) who has recently lost her mother and her boyfriend Charlie (Nikolas Holmes) who is a little dull. As they have a few drinks Laura admits to having been to see a gypsy to help with her migraines as normal methods have failed. The gypsy performed a healing ritual which cleansed her spirit and potentially removed any demons and Kevin decides they should try it themselves. Inevitably this doesn’t go quite to plan and members of the group feel or see something they can’t quite describe.

As this dabbling with the occult somewhat kills the party mood they head off for bed as the lights begin to flicker and events take a turn for the worse.

In such a restricted environment with the film being set solely within the confines of a small house it would have been easy for the co-directors to produce something dull and lifeless but despite the lack of action, and with no budget for special effects and the like, Lou Simon and Douglas Vilallba have really got the tone right with The Awakened. There are long periods of talking and, for much of the time, arguing but this all serves to build up the tension which is lacking in many of today’s horror films. 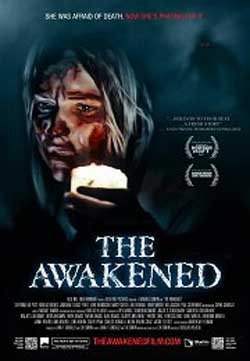 The film also doesn’t seem to have a natural plot trajectory. By this I mean that even though the events at the very start of the film give some indication of how it will end, the audience is never sure in what order the characters will meet their demise, or how. This lack of predictability gives The Awakened more of an edge, and with the claustrophobic setting creates a tangible feeling of dread. There are nods here to The Entity and to Poltergeist and the writers and directors are obviously people who have a genuine feel for the genre.

There are some minor issues unfortunately. The cast on the whole are fine although there are a few duff lines and pauses before speaking which interrupt the flow. Occasionally a character’s actions are a little odd even given the events that are unfolding and one of the deaths is a little silly. Also the ending doesn’t quite live up what has gone before and perhaps could have gone a different way. 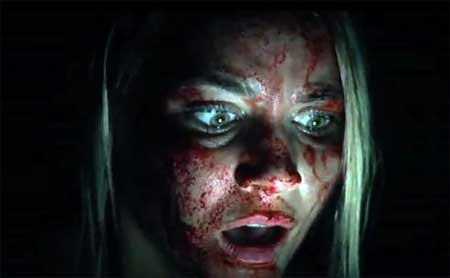 To conclude though The Awakened is an interesting film with a decent idea at its heart, and I certainly enjoyed it more than I thought I would after the first few scenes. A good choice for a Friday night with the lights off. 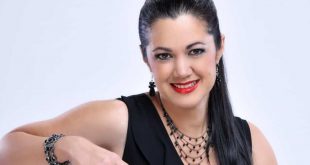 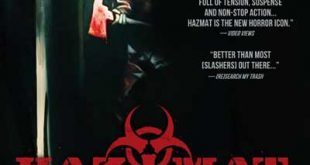