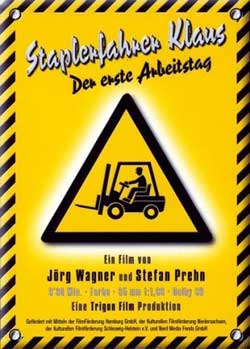 One of the great German short films depicting a mock example of an authentic safety video that one might have to endure during an employment training session. This 10 minute pseudo educational film was designed to mirror many of “those” boring regulation shorts that are passed down from the human resources department. Directors Stefan Prehn, and Jörg Wagner in turn created a fictional piece based on a new employee named Klaus who just obtained his forklift driving certification. Klaus is introduced in each segment as he makes fatale mistakes in the work place that provide serious consequences. What is great about this short film is that it truly is a gory fitting piece that is laced with dark humor. In fact, you tend to get the same amount of gore in 10 minutes that you might receive during a feature length. 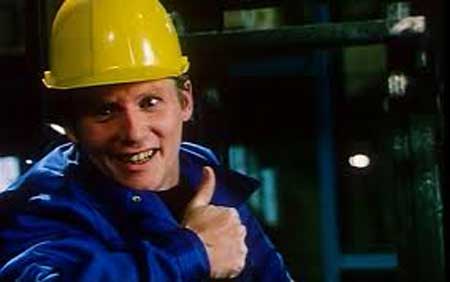 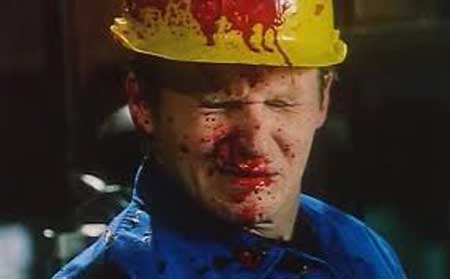 We are informed that there are approximately 37,000 trained workers in Germany. Klaus who is featured on the first day of his new job has earned the requirements to drive a forklift. As a narrator details each scene (which is often accompanied by slides and “do not do this” footage), Klaus quickly brings complete chaos to his work place with fatal mistakes that progressively grow worse. The first comes in the way of a box knife that falls from a lifted crate into the skull of an innocent worker. This is mentioned before-hand with lessons on safety, using marked lanes, and various advise about watching for people on foot. Other segments discuss the dangers of not being able to hear without obstruction, fixing a machine without a technician, or the dangers of not using adjustable belts to keep freight from falling off the lift. Of course there is the expected “don’t lift” employees up without the proper safety cages in place speel that we are so accustomed to hearing. 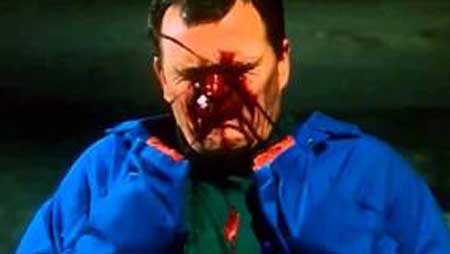 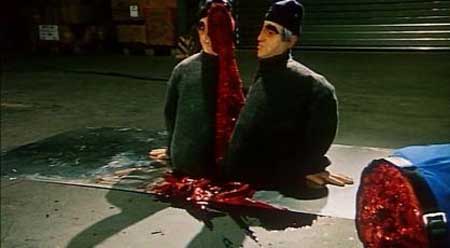 You can pretty much guess that “most” of this is actually taken from real-world advise given to new workers. The clincher here is that the scenes are illustrated in a uncensored way demonstrating several dismembering moments that are a result of the mishaps. One worker loses his hands, another his head, with another unlucky victim getting sliced clean thru and dismembered at the waist. Blood flies, employees get wasted, and Klaus ends up having a “really” bad day. Its great fun to watch created with a sense of gore hound style humor that takes things to the extreme every chance it gets. If you haven’t seen this, you can probably find in its entirety on the internet video channels.