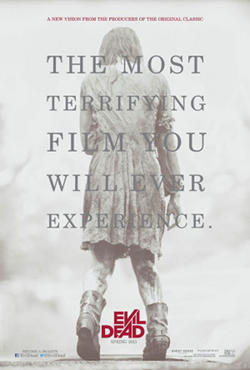 It appears that there is no keeping it lock up!

The source is impeccable, it’s the one and only Bruce Campbell and he took to Twitter to let the world know:

The film also got it’s official rating, it’s an R for “strong bloody violence and gore, some sexual content and language.” To say that anticipation if high for this one would be a gross misunderstanding of the situation. People are ravenous for this one and fan buzz is huge. The awesome trailer a few weeks back didn’t hurt things, that’s for sure.

In the much anticipated remake of the 1981 cult-hit horror film, five twenty-something friends become holed up in a remote cabin. When they discover a Book of the Dead, they unwittingly summon up dormant demons living in the nearby woods, which possess the youngsters in succession until only one is left intact to fight for survival.

A whole batch of fresh new face will show up for the slaughter this time around: Jane Levy (“Suburgatory”) as Mia; Shiloh Fernandez (Deadgirl, Red Riding Hood) as David; Lou Taylor Pucci (Carriers) as Eric; Jessica Lucas (Cloverfield) as Olivia; and Elizabeth Blackmore (Legend of the Seeker) as Natalie.

Remember to change the date, April 5th is now the day you’ll be lining up outside the theater door.