Home | Horror Tattoos – aka HorrorNews Contest (You pick the topic, and we will write about it!)

Horror Tattoos – aka HorrorNews Contest (You pick the topic, and we will write about it!) 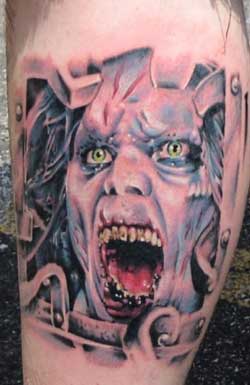 Once the province of criminals and sailors, tattoos have steadily gained traction in popular culture as a trendy form of body modification. For true tattoo enthusiasts, it becomes more and more difficult to distinguish themselves with a unique piece of art. While young adults looking to shock their parents and the world at large often turn to horror for inspiration (skulls are still one of the most widespread tattoos, after all), horror provides a wealth of ideas to those for whom both horror and tattoos are a way of life.

As previously mentioned, the skull remains one of the most common horror tattoos in the world. At eighteen, my very first tattoo was a half-smiley face, half-skull on the back of my right shoulder. Though the skull represents death, it is also a reminder that life is fleeting, and we must enjoy it while there is still time. This is why the skull’s popularity extends far beyond horror aficionados, but not everyone is looking for a philosophical interpretation of their ink. Skulls can be incorporated into nearly any design, and often for no greater reason than their projection of an “outsider” image once the hallmark of the few who bore tattoos at all.

Many people who seek out horror tattoos want nothing less than to celebrate their favorite horror films. Thus, horror movie villains from Freddy Krueger to Chucky have been tattooed countless times and persist as one of the most prevalent options for horror tattoos. Classic movie characters like Dracula or Frankenstein’s monster are enduring favorites as well. Die–hard horror enthusiasts, however, often mine cult movies for their tattoos, and so their body art may not be instantly recognizable to the mainstream—which is often part of the appeal. Literary-inspired tattoos, representing the work of writers such as Poe or Lovecraft, have also found a niche in the realm of horror tattoos. Most horror tattoos, however, do not embody a specific movie or character, but rather a general idea of “horror” as the customer perceives it. Hence the endless number of zombies inked during the craze of the last several years.

While any artist worth his or her ink should be able to produce your ideal tattoo, there are artists who specialize in horror tattoos. One of the most famous is Paul Booth, owner of Last Rites in New York City. An award-winning artist, Booth has tattooed members of major metal bands and appeared on numerous television shows. Detroit-based Bob Tyrrell did not begin tattooing professionally until age 34 but quickly rose to the top thanks to his photo-realistic style. He tattoos at conventions and in guest spots at tattoo shops across the country. Other top horror artists include Robert Hernandez and Dan Henk, both of whom have toured the world extensively. Paul Acker is a rising star based in Philadelphia, whose photo-realistic work has garnered attention from Prick magazine and others. In June 2012 his studio, Deep Six, added Dan Henk as a full-time artist. In the UK, Kamil Mocet Terczynski and partner Pawel Stroinski, as well as the artists of Frith St. Tattoo, have blazed the trail for horror tattoos in Europe. 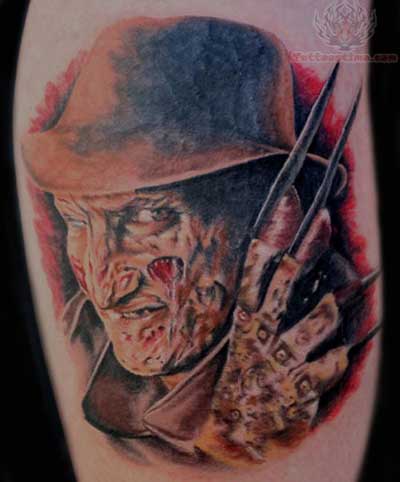 Tattoos and horror share an almost symbiotic relationship, as evidenced by the Full Moon Tattoo and Horror Festival held annually in both Nashville and Chattanooga, TN. Here fans can not only meet their favorite horror stars, but also get tattooed by artists from around the country. The attraction of horror fans to tattoos lies, perhaps, in the ritual itself. After the blood and pain, both integral elements of the horror experience, one emerges with a “permanent” piece of art—but it is only as permanent as life itself. And if horror teaches us anything, it is that life can be snatched away at a moment’s notice. To embrace the darkness represented by horror tattoos is to accept the reality of death, which makes life worth celebrating all the more. Certainly, there is no more appropriate venue to express this celebration than on one’s own flesh. 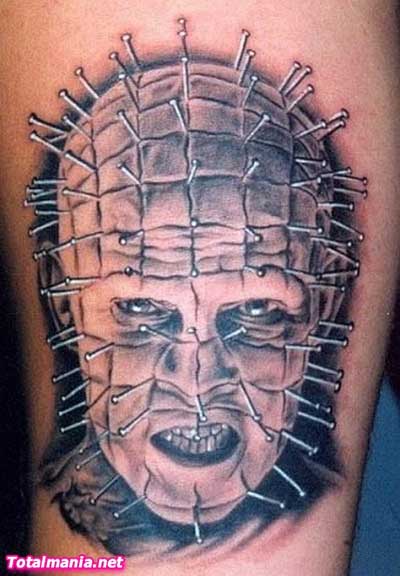 The Horror Tattoo images displayed are copywritten per the respective individual artists, and are only for the purpose of illustrating this article to readers.
Any branding callouts have been left in place.

Special thanks to Theresa Morris from Las Vegas, NV, who wrote in and requested the topic “horror tattoos.”

If you want to request a topic, please email Michael Joy at joyhorror@horrornews.net