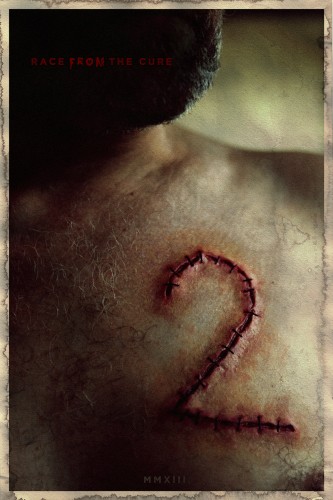 PORTLAND, Oregon (January 17, 2013) The feature film “Cell Count” went to film festivals all over the world in 2012 and is now available on all leading digital VOD stores including iTunes. It is now the Freeman Brothers’ profound pleasure to present the Teaser poster for the upcoming sequel entitled “Cell Count II: Blood Count.”

“Blood Count” starts where the first film left off and takes our survivors on a high speed journey filled with monsters and fugitives. It is a bloody high octane counterpart to the slow burning original film “Cell Count.”

“”I’ve been so excited to get started on the sequel ever since writing the original screenplay for Cell Count. That film was always meant to be the first act in a much bigger story. Blood Count is the second and much more insane act. I liken it to Road Warrior meets Aliens. Not necessarily in story… but most definitely in tone and scope. We are putting the pedal to the metal and getting bloody. I can’t wait to share what happens next. It’s big, bad, and out of control.” – Writer and Director Todd E. Freeman.

The Freeman Brothers are also working on a Special Edition of the movie for DVD and Blu-ray, including behind the scenes videos and audio commentaries, to be released later in the year.

Find out more and stay up to date with Cell Count at: www.cellcount-themovie.com

Stay tuned to the Cell Count II: Blood Count website for all news regarding the film at: www.cellcount2.com