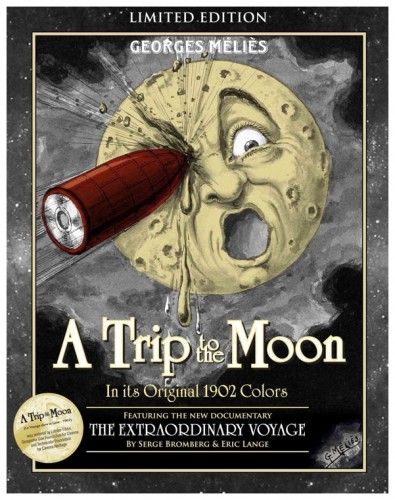 “A group of astronomers study the way to travel to the moon. When they conclude their project, the president selects five other astronomers to travel with him. They embark in a shell and they are shot from a giant cannon to the moon. When they land, they seek shelter in a cave to protect from the snow. They meet the Selenites, the alien inhabitants of the moon, and they are destroyed by the astronomers that find that a strong hit make them explode. However, they arrive in large numbers and the astronomers are captured by the Selenites. But one astronomer hits their king that explodes and they run to the capsule pursued by the alien. They drop the capsule that falls through the space and reach the ocean. Then they are rescued by a steamer that brings the team safe and sound ashore.” (courtesy IMDB)

Brothers August Lumière and Louis Lumière gave the first public demonstration of their ‘cinematography machine’ in Paris in 1895. Seven years later Georges Méliès made his film A Trip To The Moon aka Le Voyage Dans La Lune (1902), which is probably the first film actually based – however loosely – on the work of a science fiction author, though elements of science fiction can be detected in the trick photography of the earliest films. Méliès was the son of wealthy parents who indulged him in his desire to be a magician by buying him his own venue – the Robert-Houdin Theatre – where he produced a series of very popular conjuring shows. 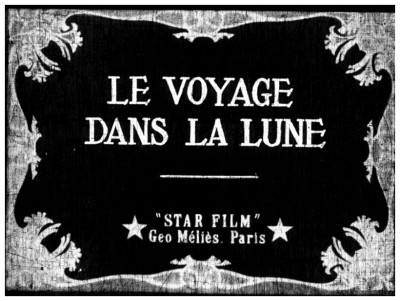 In 1895 he witnessed the Lumière brothers’ demonstration of moving pictures and was immediately impressed. First he tried, unsuccessfully, to purchase their equipment. Then in 1896 he managed to obtain a projector from the English film pioneer Robert Paul, who had independently developed his own movie-making equipment at the same time as the Lumière brothers. Méliès converted the projector into a camera and was soon making his own films but, being a magician by inclination, he concentrated on the medium’s potential for trickery and opened the first film studio in Paris, called Montreuil-sous-Bois. The next year he released his first picture L’Auberge Ensorcelee (1897), in which a man (Méliès himself) is frightened when his clothes disappear, his boots walk unaided and his furniture collapses. 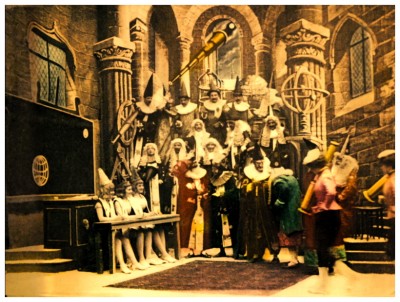 From 1897 onwards, he made a number of increasingly elaborate movies that utilised both photographic effects and the stage effects that he had developed in his theatre. Most of his films – with the exception of his ‘reconstructed actualities’ which were reconstructions of contemporary and historical events – were made purely as entertainment with the emphasis on humour, and this also applied to A Trip To The Moon. Though incorporating elements from both First Men In The Moon by H.G. Wells and From The Earth To The Moon by Jules Verne, A Trip To The Moon was played strictly for laughs: The moon projectile is loaded into the space gun by a line of grinning chorus girls; the Man In The Moon is shown with the projectile stuck in his eye; the moon travelers encounter a group of cardboard-cutout Selenites who tend to explode when whacked with an umbrella: the travelers fall off the moon and safely back to Earth due to “The pull of the Earth’s gravity” just in time to witness a statue being erected in their honour. 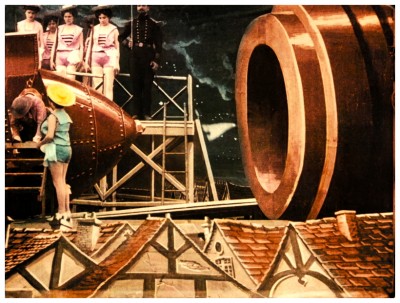 A Trip To The Moon is symptomatic of both an early stage of cinema and the new possibilities it could foresee. Composed of about twenty shots, mostly static, it doesn’t let reality get in its way and, at times, even seems to ignore the basic laws of perspective. However, using elaborate scenery with removable parts, cuts, dissolves and double-exposures, Méliès is able to bring to life a world of pure fantasy. Music hall singers, dancers and acrobats appear in front of the camera at a time when so-called respectable actors wouldn’t compromise themselves in what was not yet considered a recognised art form. 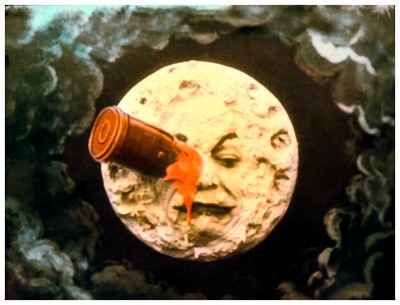 For various filmmakers, including American Edwin S. Porter, Méliès improbable adventure quickly became a model to imitate from a technical, narrative and aesthetic standpoint. Even today, the brief shot that shows the shell landing in the eye of the moon’s face remains one of the most famous images in history, and still retains at least some of its poetic – as well as comical – attraction. Méliès foray into space is reported to last almost twenty minutes, quite lengthy for a film of that era, although most surviving prints are closer to fourteen or fifteen minutes. Since films were usually sold by the metre, A Trip To The Moon was a rather expensive picture and, at first, the filmmaker’s clients refused to invest so much money. However, after a triumphant public screening, orders quickly began to flow in. The film’s success was international, but all the money won didn’t go straight into Méliès pocket, as bootleg copies were widely distributed throughout the United States. Some things never change. 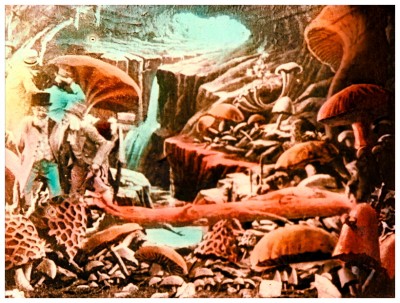 Similarly absurd was An Impossible Voyage aka Le Voyage A Travers L’Impossible (1904), in which a high-speed train takes off from the summit of a mountain, travels through space and falls into the sea before returning to dry land, all achieved with Méliès repertoire of primitive yet ingenious special effects, including stop-motion photography, split-screen multiple exposures, giant moving cutouts and live-action combined with full-scale mechanical backgrounds. He also applied the same treatment to Jules Verne’s Twenty Thousand Leagues Under The Sea (1907), though it’s doubtful whether the illustrious French author would have approved of the half-naked sea-nymphs who greet Méliès’ underwater explorer. 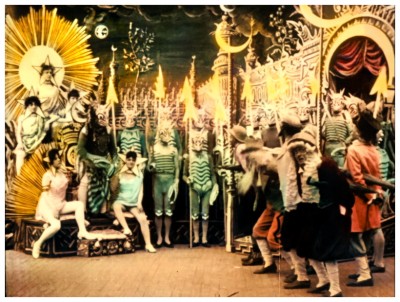 For years, demand was high for the special effects films that Méliès created. While cinema was growing everywhere, Melies films were much copied, yet no one was doing the kind of films that Méliès could. The first animated film, Gertie The Dinosaur (1909), was created by Winsor McCay but it made no real impact other than being the first of its kind. Méliès became bankrupt in 1913 after refusing to evolve his style to suit new audience needs, yet his innovations remained in practice for decades. Cinema was moving away from the fantasies Méliès was famous for, and dramas such as the italian Quo Vadis? (1912) also marked the birth of the Historical Epic genre. 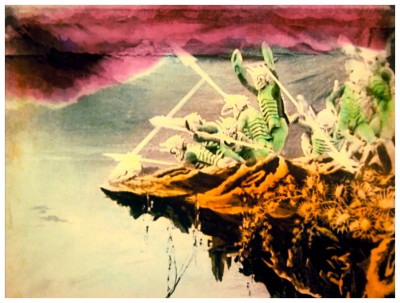 In all motion picture making, transportation has remained a mechanical dream. It’s because the movie camera is itself a machine that moves to make a dream. By changing a cog, it can slow down or accelerate action. By cutting from an extreme close-up to a long-shot, it can make a standing jump of a mile from an object in one twenty-fourth of a second. It can play with speed and deny time. However realistic a film may be, the very process of its making is unreal in terms of human speed and human hours. It is the medium best adapted for portraying the mechanical dream, for that is the very process of film-making. It is the fantasy of escape through a practical machine that has fueled dreams since the first days of the steam engine and the moving picture. I’ll allow you to mull that over for the next week or so, when I’ll be back to discuss another genre classic for Horror News. Until then, good night and remember, as my old friend Bela Lugosi would say, “Bevare! Bevare of the big, green dragon that sits on your doorstep – and the gifts it leaves on your lawn.” Toodles! 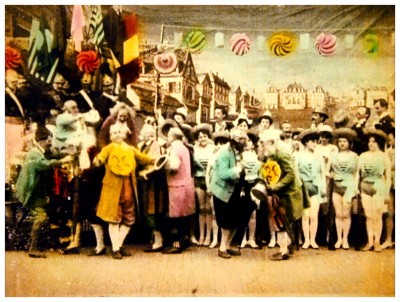