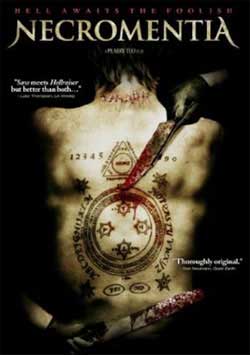 A off-world look at the superstitious repercussions of tattooing an Ouija Board on your body. Hagen, who has a dead wife believes that he can revive her from the dead. Travis, a man who lost his brother and wants to join him in the after life. Morbius, a bartender who is betrayed by those he loves comes back from the dead to take revenge. And a strange man only known as Mr. Skinny protects the secrets of the Ouija Board and how the stories weave and affect each other.

QUICK FIX:
In this PULP FICTION-style narrative flick, four people learn the hard way what happens when you carve a Ouija board on your back and try to summon the forces of darkness – one lonely dude wants to bring his lovely wife back from the dead, another feels he has nothing left to live for and wants to join his brother in the afterlife, and yet another who is already there wants to come back to our world to smite those who put him there. In the immortal words of Pinhead, “No tears, please. It’s a waste of good suffering.”

RAMBLINGS:
It’s amazing to me how sometimes the things you try to avoid in life come back to find you eventually, even when you thought that you’ve long ago found a great hiding place. When this movie landed in my lap for review a few days ago and I saw the title, I immediately thought of one of my online friends and fellow writers who goes by the well-earned moniker of Necromagickal, and I couldn’t help but smile and even laugh a little bit. See, for years now he’s been trying to convince me that the grass is always greener on the darker side of the fence, and that horror flicks that delve deep into the world of necrophilia and the like is where it’s truly at. And, though I’ve thought about it off and on since (watching the movies, not doing the actual deed…as far as you know), I never really got around to it. And let’s face it, one sees a movie title like NECROMENTIA, and when one has a twistedly perverted mind like mine, that’s naturally what I assumed. 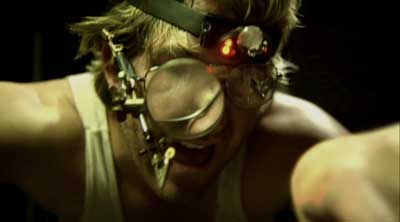 But I was sort of misled….sort of. While that subject is in fact touched on, it’s more implied than shown. Oh, and Necro, if you ever read this, consider my cherry officially popped on the “philia” flicks. I know it was a lite one, but a guy’s gotta start somewhere! Anyway, this deals more with the subject of necromancy then anything else – summoning the spirits to try to get something out of them. In this case, like is mentioned above, everyone in this story wants something from demons to humans wanting something from each other. 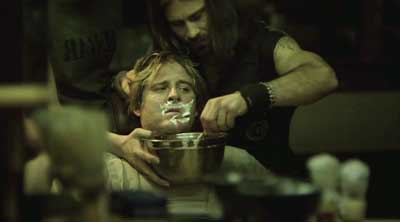 Since watching this flick, I have a feeling that comparisons to everything from HOSTEL to HELLRAISER will be drawn…and while this little indie gem owes much to those movies, it doesn’t rip off either and actually does a nice job of standing on its own merits. Plus, this flick pulled off something with me that the ridiculous HOSTEL movies never could and never will – it gave us a graphic torture scene that had an actual purpose to the plot instead of just scenes inserted and blown up over the top as much as possible for shock value.

Apparently, director Teo has several writing and directing credits, of which I’ve seen none…YET. I’m impressed with his visual style and how he handled things on this flick, and I will make it my mission now to seek out more of his work. 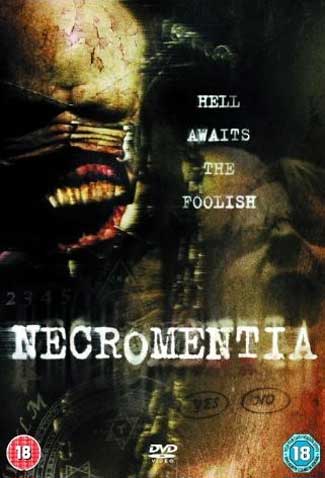 Viewing this movie for a 2nd time, I found it even harder to believe that this twisted little picture came from the mind of a woman, but Stephanie Joyce, I salute you!! Far as I could find, this is her first screenwriting credit but hopefully not her last. If this is the bleak vision she has to offer her first time out of the gate, bring on more! 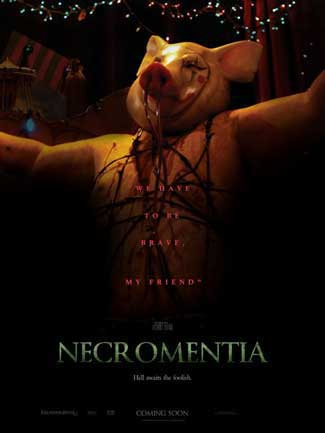 LAST WORDS:
When I picture HELL in my mind, to me it’s still being married to my first wife and not a long dark steam tunnel. But on indie horror budgets, to each their own and props for imagination and making the most of things. I cannot find anything online about a DVD release date for this one, but I’ll keep checking and those of you into this sorta thing should keep looking as well. I’ll say this, this movie is not going to be everyone’s cup of pus, but then again it’s really not supposed to be and that’s alright.

It’s dirty, nasty, gritty, and comes jam-packed with everything from S&M to necrophilia to carving fetishes to a giant pig/man singing about the joys of suicide, and I really dug the f*ck out of it – not just the ride itself, but the underlying messages about dealing with life and moving on to make the most of it no matter what, cuz it could always be worse after you’re dead. It’s a very kickass low-budget indie flick, although I will admit that I feel like I really, REALLY, need a long hot shower after watching it! 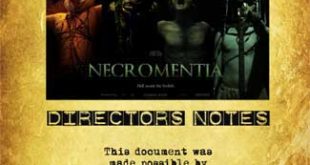