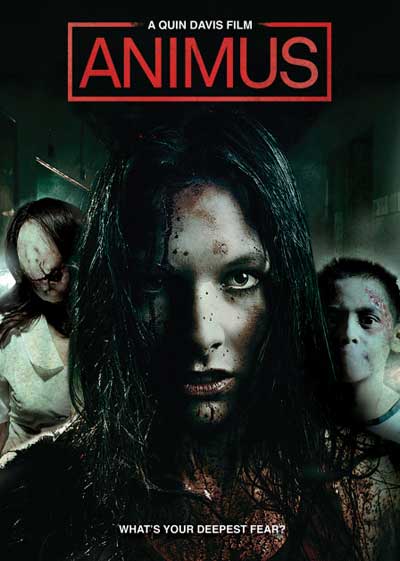 A group of students making a documentary about a reputedly haunted abandoned mental institution discovers there is more than a grain of truth in the rumours.

Let’s face it, ANIMUS is not going to win any prizes for originality: the ‘abandoned asylum’ thing has been done several times in the last couple of years alone and the ‘making a documentary’ angle has been flogged mercilessly ever since THE BLAIR WITCH PROJECT became an enormous hit. Sadly, neither is ANIMUS going to win any PRIZES for acting, photography or writing as the extremely low budget has severely limited progress in all three of those areas. However, riddled with faults as it is, ANIMUS does have one or two things going for it and I’m going to try to convince you to give it a chance.

A brief pre-credits prologue sequence takes us back to 1976 and the Hostedler residence in Copper Queen, Arizona. We see the aftermath of a brutal murder of a middle aged lady while her terrified husband hides in upstairs room before blowing his brains out just as the door starts to open. Back in the present day, at the University of Arizona in Tucson, we meet a group of none too conscientious students on the non-fiction cinema course. Maya (Megan Davis) is looking for a suitable subject for a documentary and, acting on a tip from her kooky roommate Angel (Caitlin Singer), decides to focus on the abandoned Copper Queen Hospital, a mental institution which was linked to the Hostedler deaths years before. Teaming up with friend Mekalia (Tiffany Ann Bicheler) the girls pick up some rented AV equipment and head off for Copper Queen with Angel’s boyfriend Daniel (Brandon Lee Pittman) and fellow film student Lucas (J.A. Cuffs Bratten) in tow.

Once there they conduct a number of interviews with the town’s increasingly bizarre inhabitants culminating with a former nurse at the hospital, Mrs Campbell (Joan Schumacher). The now elderly woman recalls how the hospital administrators got untreatable patients off the books by releasing them into a labyrinthine series of tunnels beneath the hospital’s basement. She also recalls the arrival of a patient named Isaac who it transpires was the illegitimate child of Dr Hostedler’s extra-marital affair. The furious Mrs Hostedler demanded that he get rid of the child. After Mrs Campbell tried to find out what became of the young boy she was asked to leave the hospital and told that he had died. But when she learned of the Hostedler killings she was convinced that Isaac was responsible.

Armed with all this lurid information the students head off to the site of the institution and manage to break inside but before long they are not only hopelessly lost but also being stalked by a bloodthirsty creature that lives in the catacombs.

And really, that’s the point at which the film starts to become enjoyable. Up until then the poor acting, witless script and ugly visuals combine to make the viewing experience pretty wretched but the film-makers are clearly on more comfortable ground with what is basically an extended chase punctuated by some gorily inventive death sequences. The perpetrator of the carnage is an interesting creation and actually a very effective one, like an unfathomable, unstoppable nightmare – a sort of cross between Michael Berryman and SILENT HILL’s awesome Pyramid Head. The directors (yes, there are two) Quin Davis and Wade Stai give their beast plenty of gruesome work to do and the special effects in these scenes are very impressive.

It’s a pity that the limitations elsewhere in the production spoil the overall impact of this movie because there is plenty of talent at work behind the scenes. With a larger budget at their disposal, these two film-makers should be able to acquire the means to display their skills more effectively and I hope they get the opportunity to do just that.