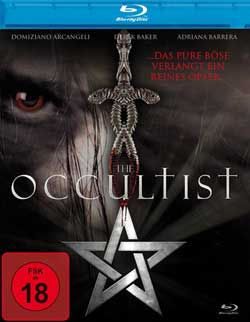 When a group of med students go to take their final exams, they find themselves subjects of a twisted and bloody Satanic ritual led by their professor. It’s up to two of them to save all.

In these austere times it is admirable for a film to be produced for a relatively small budget. I don’t meant the micro-budget films such as Everyone Must Die which are made for less than the price of an average second hand car, but films that have a reasonable amount to play with around the $250,000 to $500,000 mark. Open Water (2003) was apparently made for something in the region of $130,000 and more recently Kill List (2011) was estimated at under $500,000. So this shows that good, scary and suspenseful films can be made without a perceived big budget. 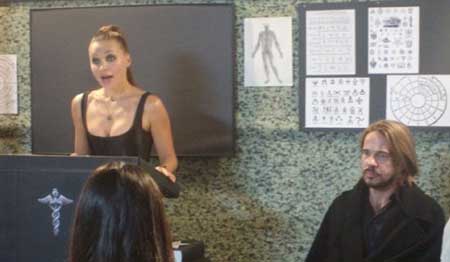 Therefore when I approached The Occultist (2009), formerly known as The Ritual, I expected good things from the $250,000 Sterling Entertainment sent the way of director Novin Shakuba. A story involving Satanic rituals, a motley group of students, a mysterious European doctor mixed with some gore for good measure. A recipe for a good film I thought. How wrong I was.

The Occultist opens with a credit sequence featuring graphics and music that appears to have been lifted directly from a 1970’s television thriller, and a poor one at that. The sound and picture quality is so invasive to the senses as to be unpleasant and the film never quite recovers from these troubled and unimpressive beginnings. Following a few preliminaries, involving what appears to be the severed hands and feet from some clothes store mannequins, we see a small classroom in a made up university populated with several cliché ridden students. 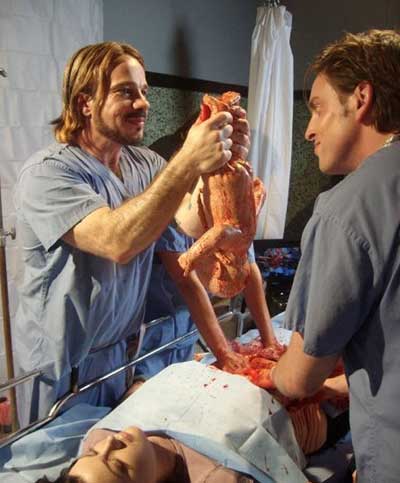 We have the player, the quiet studious type, who happens to be a virgin but more of that later, and a handful of busty young ladies dressed in low cut tops. As they chat their teacher Dr Shiva (Ursula Vari) enters with the aforementioned mysterious European Doctor Szandor (Domiziano Arcangeli). Dr Shiva proceeds to explain to the class that their final exam will take place this evening following a lecture from Szandor, which will be based around the the links between medicine and the occult. When she announces that this will all take place at her own home there are ripples of surprise and curiosity from the students. She quells this by declaring that she will be hosting a small party following the exam as, coincidentally, it is All Hallow’s Eve.

When the teachers leave the students argue about whether there is enough time left to study and what they should do next. The two teaching assistants who have been lurking at the back of the room warn the rest of the class not to miss the exam and leave, prompting the rest of the group to pair off and go their separate ways. For no previously established motive the killing now begins. 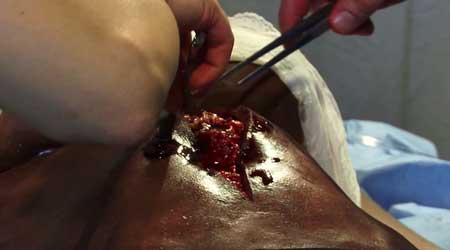 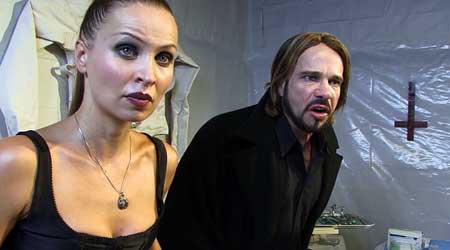 Initially let me tell you what The Occultist is not. It is not scary, gory, funny, sexy or creepy in any way at all. The random killings when they occur are unconvincing and you can actually see the blood being pumped from someone’s wound at one point. As I stated earlier the body parts are clearly from mannequins and are poorly disguised, and there is nothing here that even the most squeamish of films fans will find offensive. Strangely the live action is cut with scenes from actual medical procedures but the difference in the film is evident and as such adds nothing to the story or the film itself except further confusion. It is as if the director has attempted to pay tribute to the exploitation films of the 1970’s and it just doesn’t work. There are hints towards sex and eroticism, and even a flavour of lesbianism, but these are not followed through and had they been may at least have brought a little colour and perhaps humour to the production. 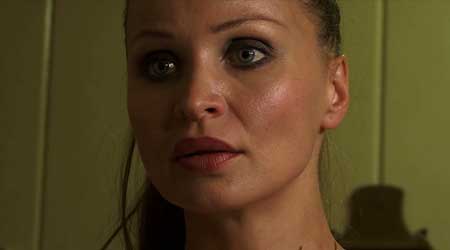 The performances from the cast are equally poor. Each one of them struggles with the leaden script and all appear uncomfortable when asked to move and talk at the same time. I am sure that on at least one occasion I saw and actor look at the camera. Domiziano Arcangeli is a veteran of more than 100 films but here he brings nothing menacing or shadowy to the role of a Satan worshipping surgeon and struggles throughout the film with his accent. He also seems to suffer from a strangely shiny head and curious facial expressions, and baulks at the sight of blood on more than one occasion. Ursula Vari spends the majority of the film shouting her lines and never convinces as the leader of the group. There is even the age old cliché of it needing to be a virgin for the final sacrifice and I am giving nothing away in saying this does not go to plan.

Overall The Occultist is a poor film. There is nothing here of interest and given it’s reasonable budget this can only be judged as a disappointment. In truth it is hard to see where the money has been spent and I’m afraid I could not find one redeeming quality or reason with which to recommend this film.