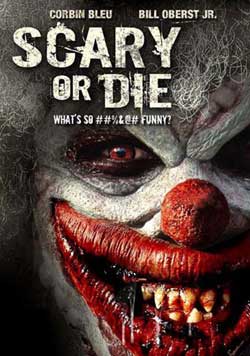 There’s a cliche regarding horror movie audiences that we feel compelled to shout advice at the screen. “No don’t open that door,” or “he’s only playing dead”, and suchlike. I found myself doing something along those lines while watching “Scary or Die,” only my warnings were aimed at the writing and direction rather than the hapless characters.

“Scary or Die” is an anthology film in five segments, presented as videos offered up on the titular website (think “funny or die”, just slightly more morbid). Lacking any characters or tension to speak of, it’s not much of a bridging narrative. It’s a bit like if “Creepshow” excised the family drama that bookends that film, and instead merely stuck with Tom Savini flipping through an old EC comic book. As it is we’re left with little more than a few shots of the computer screen, and closeups of a hand clicking a mouse. Riveting stuff, but it does serve as a jumping-off point for the five segments: 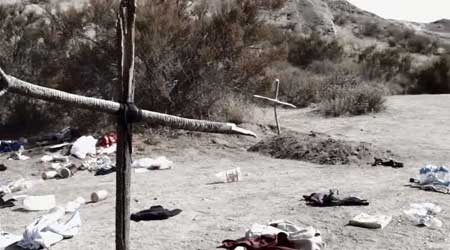 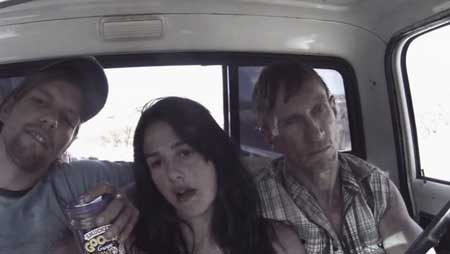 THE CROSSING
The first segment begins with a duo of yee-hawing rednecks and their inexplicably attractive lady-friend driving around in a pickup truck, cracking racist jokes, and drinking PB&J-flavoured moonshine. Naturally, the young lady is shot much more flatteringly. The director might as well have handed them name tags reading “violent” and “psychopath”. We’re led on a merry little jaunt to the local (and unofficial) Mexico/US border crossing, where we learn that the two have been making a sport of murdering Mexican-Americans and dumping them at the crossing as a “warning” to incoming illegal immigrants. So there you have it, right? A twisted tale of the politics and pathology of xenophobia, seen through the lens of the horror film. That’s great; I love it when cultural criticism gets all mixed up into my scary movies. It’s been about as subtle as a wrecking ball, but I’m willing to chalk that up to a tiny budget and inexperienced crew.

Then zombies happen and the whole thing goes sideways. It’s unclear why their victims suddenly rise up out of their shallow graves to wreak havoc on their tormentors, although it’s implied that it has something to do with some of the moonshine that was spilt. Maybe they should stop spiking it with 2-4-5 trioxin, but I digress.

I suppose it was a twist ending, but one more intent on being clever than on actually being good. There’s a nice little nod to the very end of Romero’s original “Night of the Living Dead” right at the closing of the segment, but by then the damage was already done.

TAEJUNG’S LAMENT
The second segment stood out tonally from the first, with it’s unhurried pace and near complete lack of dialogue. This moody piece centres around a middle-aged Korean man haunted by the loss of his daughter. One evening, TaeJung witnesses a kidnapping, as a girl who resembles his late daughter is accosted on a dark street and roughly forced into Honda Element.

That’s right: a Honda Element, those cute little crossover SUV’s. Bad-guys don’t drive grey crossover SUV’s, that’s just a given. Sinister stalkers should be riding around in rusty black panel vans, Iron Butterfly’s “Inna Gadda da Vida” pumping through their closed and tinted windows.
What follows is a brief chase sequence where he desperately follows the kidnapper. Events unfold in a more-or-less satisfying manner: he rescues the girl, she thanks him, and his grief abates. Then, once again, the writer gets all clever. Vampires this time.

One half expects for the camera to pan aside, revealing Rod Serling smoking a cigarette. “Betcha didn’t see that coming,” he would ask. No sir, we didn’t. But that doesn’t make this a good story. It’s not enough to simply set up audience expectation and then go off on a random tangent. That’s not how irony works. That’s just a sloppy bait-and-switch. 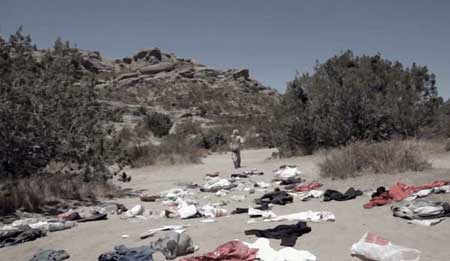 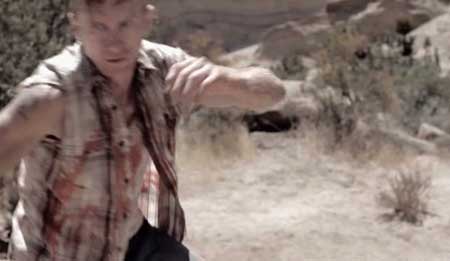 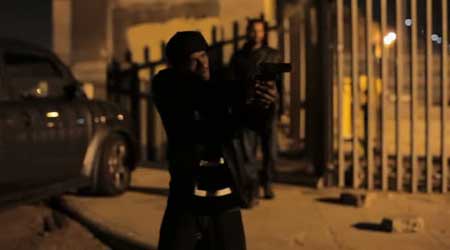 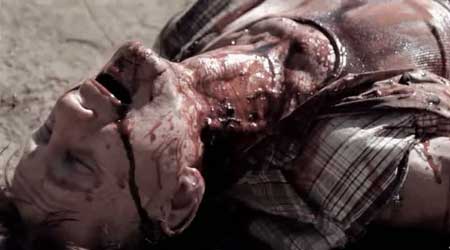 RE-MEMBERED
Well, we’re off to a pretty rocky start, but the middle segment might just turn things around, right? To be quite honest, this one was reasonably well executed. I mean, some of the driving camerawork is a bit wonky, but this segment actually hung together quite well. Since the plot actually hangs together on this segment, I won’t go into much more detail than to say that a hit-man learns too late that there’s more to his target than meets the eye. By itself, this segment would make an admirable student film or short calling-card movie. In a better anthology, this one would just squeak under the bar, padding out the running time between its more compelling fellows. As it is, this is perhaps the strongest bit of film-making in “Scary or Die,” and that there is a problem.

CLOWNED
Which brings us to the tent-pole segment, which provides the scary clown image that’s splashed all over the marketing material. Perhaps I’m a bit jaded by my stack of Insane Clown Posse CDs, but I feel that the image of the evil clown has become so denuded through repetition that it’s lost all of its punch.

An affable drug-dealer is bitten by an evil birthday clown, and finds himself slowly turning into a similarly evil clown. I feel ridiculous typing that down, but I must confess I find the notion intriguing. Human bites (clown or otherwise) are nasty, septic things. However, for the sake of the plot Emmett forgoes a trip to the hospital and instead as his vicious new leg-wound festers.

Now, I’m willing to go along with the notion that the state of being a hideously deformed clown that craves the flesh of small children is somehow spread like rabies. There are a lot of ways that story arch could be handled. You could play it for laughs, poking fun at the absurdity of zombie movie tropes; you could play it straight with an unreliable narrator, descending into the character’s bizarre madness; or you could focus on the surreal body horror, grossing out squeamish viewers as Emmett undergoes his hideous transformation. Although there’s a bit of that last one in “Clowned”, the primary affect is melodrama. As baffling as it sounds, we’re talking full-on violins and hankies! And if the ever-present sobbing string orchestra doesn’t tip you off, there’s a helpful voiceover narration to guide you through every emotional beat of the story. And not just any voiceover, either: a dull and muddy-sounding affair that sounds as tacked-on as it does poorly recorded.

When the inevitable clown-on-clown fight scene rolls around, it seemed less a thrilling conclusion to a weird story, and more like a rote ending to a story that wasn’t leading anywhere in particular. 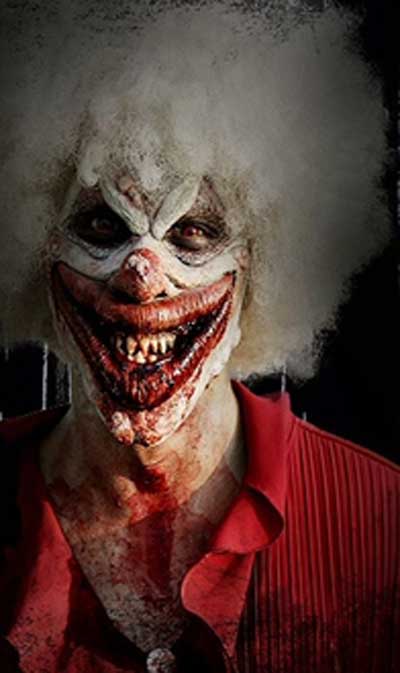 LOVER COME BACK
The reliance on voiceover continues in the fifth and final segment: a southern gothic tale of love and revenge, with a hefty dose of voodoo powder. The story is told entirely through voiceover narration, with a moody little montage along for the ride. Like “Re-Membered”, the film is internally consistent and reasonably well-crafted, although it likewise feels like something out of a new film-grad’s demo reel. It’s the kind of thing you might call a “tone poem,” if you’re feeling a little pretentious. But it’s short and sweet, and does its job with plenty of mood and style. As a student film, I’d be applauding it heartily. However, this is a commercial release, and the bar is higher.