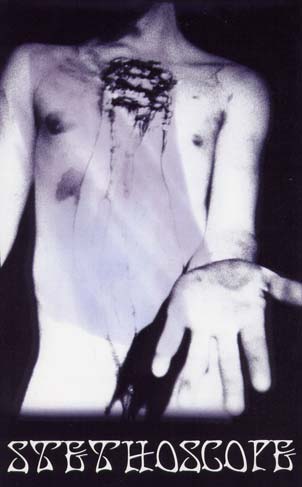 The ORIGINAL zombie p*rn! – Stethoscope is a 16-minute “gore-nography” film, combining hardcore p*rnography with horror film gore. The story opens on a seemingly abandoned warehouse where 4 young partygoers stumble across a sight unlike any they’ve seen before: a ritual feeding of sex zombies,who thrive on both flesh and sexual pleasure.

“Stethoscope” is a 2001 short film directed by Kenneth Thomas. Clearly an art house experiment that explores a series of visual extremes, the film begins with a collage of random pattern images before merging into a undisclosed location where a man watches 2 naked women brawl in the dark (while he masturbates). Progressing to one of them attacking and biting into the other it presumed to be some kind of ritual behavior. This only progresses into a demonic strap on phallic anal invasion before the onlooker decides that participation is a must. The dark confines of this piece heighten the visual enigmas which seem to be a conversion of sex and gore.

As this display of psychotic debauchery carries on, we learn that the man was one of a group who are eagerly are waiting in line to partake or voyeur the experience (some of which grow nauseous from watching). Soon the act of voyeurism becomes a line crossed that can only mean moving forward from.

Use of slow motion and reversals add a dramatic flair to the footage as it plays over a haunting musical backdrop. Stethoscope is a gritty piece often left to flashlight lighting.

Creator Kenneth Thomas has created an over the top piece that borrows from our primal interest in vampirism/zombism and takes it to the next level displaying hidden secrets that are tucked away in dark places. The more explicit scenes would qualify for p&rn, but because of the horror aspect and editing finesse, “Stethoscope” is closer to sinister art house than anything. An adult piece that of course is limited to an “over 18” level of viewers. Stethoscope indulges in its bloody eroticism leaving viewers with an visual experience like stepping into a room they weren’t supposed to see. Not for everyone, or even mos.t but it does have its artistic merit.

Stethoscope is not publically available, but can be accessed by contacting Kenneth at www.bloodsweatvinyl.com/