The feature length film done in episodes DAEMONIUM will be premiering the second Chapter online and totally for free thru the official YouTube channel and all social networks on the internet. This premiere of the second episode will come into effect on Friday December the 7that 10:00 pm Argentine time, 8:00 pm Eastern US and 5:00 pm Pacific Time US, on www.youtube.com/DaemoniumSaga.

The first chapter has received an enormous amount of visits on YouTube and it has actually been dubbed in other languages by fans of the saga. The subtitled thailandese version made by an actual fan has reached over 310,000 hits!

There is a great expectation for the premiere of the second chapter, which has doubled its efforts by bringing a detailed look with new wardrobe designs, complex VFX and the selectionof the main location where the movie takes place, situated in the villa of Epecuen some 7 km from the city of Carhue a province in Buenos Aires, a city that looks as if it came right out of an apocalyptic movie.

On a relevant note we have also added to the series the participation and personalities of Latinovoice over artists such as RAUL SOLO (Immortals, Transformers ), GERARDO GARCIA (Futurama, Robotech), HUMBERTO VELEZ (Homer Simpson, Terminator), RENE GARCIA (The Matrix, Dragon Ball), and MARIO CASTAÑEDA (Mc Gyver, Dragon Ball) amongst others. 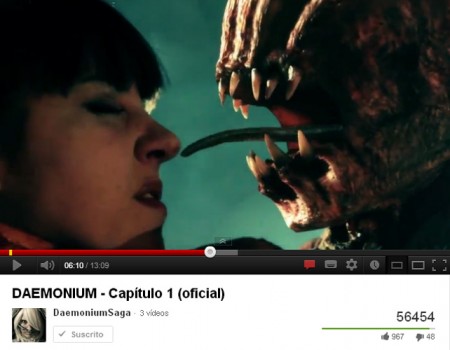 The movie is an original idea thought up by Simon Ratziel and Dany Cascoand is going forward with some of main references and influencesof the film genre in Argentina, such as FARSA Produccciones, Rabbid Fx,Studio Patna, which have also associated with Estudios Nerdhaus,Martin Coca,Priomania Fx and Gilberto Zhu Studio.An experimental director Pablo Pares has taken the helm and is one of the most influential and sought out Directors of fantasy, science fiction, and horror in Latin America.

The story plot of the second chapter is centered on a group of mercenariesthat venture into the evil wastelands in search of a portal to another world. They have taken Lucio Fulcanelli captive, a powerful wizard that can make contact with the Demons and what started outas a routine mission, ends up condemning all humanity!