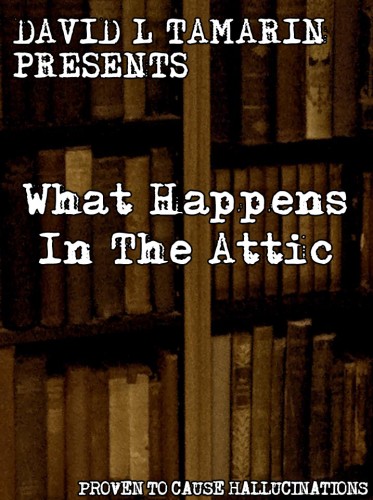 What Happens in the Attic
Author: David L. Tamarin

WARNING: Some of the scenes described below are not for the faint of heart. Do not read if you don’t wish to be sickened.

David Tamarin labels himself as an author who’s “…writing is known to cause panic, anxiety, trauma, hallucinations, delirium, psychosis, vomiting, fainting, heart palpitations and priapism.” After reviewing his short story “What Happens in the Attic”, I guess I can believe it.

As a devout fan of the genre known as splatterpunk, I’m certainly used to the violence-drenched work of such authors as Edward Lee, John Skipp, and Wrath James White, so I wasn’t bothered a bit by Mr. Tamarin’s warning not to read the book if I had such and such medical condition. Indeed, I was excited to read something from an author I had never heard of and so, keeping Ed Lee in mind, I delved into the thirty or so pages that make up this short story.

From the start, I was appalled by Mr. Tamarin’s writing, but it wasn’t the sheer amount of blood and gore that turned me off of the story; it was the way he used the violence. Page after page were descriptions of rape, torture, etc., most of which did not follow any coherent story line.

While there was a story there (Grandfather teaches his young grandson about the horrors of Vietnam through the use of living dolls), many of the scenes just didn’t make sense. For instance, in one sentence our storyteller is being burned with a cigarette and then without explanation in the next sentence he is suddenly puking up babies.

Besides there being no coherent story to follow, the short story is riddled with grammatical errors, which is something I’ve became increasingly annoyed by in ebooks.

If you do manage to spend the next fifteen of your life reading this disgusting story, you’ll find that there isn’t much of an ending to be had. The story is concluded with a single line that is supposed to make the reader feel sympathy, but instead just makes you feel annoyed that you spent so much time reading garbage.

If you’re still with me, I want to warn again all of the splatterpunk fans out there: this just isn’t worth your $1.23, especially considering how cheap and excellent some of the other ebooks on the market are. This is not reminiscent of Edward Lee or Craig Spector at all; rather, it is thirty pages of rape, cannibalism, and violence written without any of the talent that those men have. Save your dollar and go to McDonald’s.

Tags David L. Tamarin What Happens in the Attic