Home | Creature Profiles: The Four Horsemen of the Apocalypse

Though they appear only in 6:1 through 8:5 of the Book of Revelation, the Four Horsemen of the Apocalypse are one of the most enduring, and most feared, aspects of St. John’s vision. For Biblical literalists, the Four Horsemen are real figures, part of a future apocalypse predicted by the exiled St. John, in which war, famine, disease, and death will visit those who do not follow the Christian god. For scholars and skeptics, they are part of the larger allegory St. John constructed for believers persecuted by the Roman government. It was essential that early Christian leaders give their readers hope for Rome’s harsh judgment by God for its injustices against them, lest believers decide to reject the new religion altogether.

When Christ breaks the first seal, the white horse and rider appear. The rider wears a crown and carries a bow, and journeys across the land to conquer all in his path. This rider signifies the infamous Antichrist, who uses his charismatic personality to unite the world under his rule before revealing himself as the Devil incarnate. That John chooses a white horse for so evil a figure is an intriguing allusion to the idea that the Antichrist will initially be perceived as “good” and will, at first, do great things for the world. But the rise of the Antichrist is only the first in a series of miseries to befall the world before its end.

The second horseman emerges on a blood red horse; he is given a huge sword with which to turn people against each other. It is clearly a metaphor for global war and Armageddon, the final battle between good and evil. While it is rather difficult to imagine all of Earth’s armies converging in Israel, the threat of global nuclear war is still very real. Nine countries, including the highly unstable Pakistan, already possess nuclear weapons. The St. Louis Post Dispatch recently noted that “[i]n a nuclear war involving as few as 100 one-megaton bombs, effects on planetary infrastructure and food supplies would be so severe as to make recovery unlikely for decades.” With the planetary number of nukes numbering in the thousands, the idea that so few could effectively destroy our civilization is a sobering thought indeed.

The third seal reveals the black horse and rider, who holds a pair of scales. A voice declares, “‘A day’s wages for a quart of corn, and a day’s wages for three quarts of barley…’” Thus we are introduced to the horseman of global famine. While the world is producing more food than ever, prices continue to explode, and one billion people worldwide currently experience food insecurity. As global warming contributes to crop failures in the American Midwest, the world’s food supply becomes ever more precarious. When desperate people begin to riot, regional flashpoints detonate into full-scale wars, and eventually society collapses.

The final horse, immortalized in Johnny Cash’s “When the Man Comes Around,” is the pale horse, whose rider is Death himself. While not specifically stated in Revelation, this horseman is generally believed to represent global plague. The human race is constantly at risk of a pandemic, as the Black Death and the Spanish Flu have proven, but now it can spread around the world in a matter of days thanks to air travel. Plague is also the frequent companion of war and famine. Some, however, claim the pale horse alludes to something even more sinister than a natural pandemic: biological terrorism. With the means for engineering certain viruses already available, it may be only a matter of time before a large-scale biological attack becomes a reality.

While many Christians accept the Four Horsemen as prophecy, and current events certainly make it easier to do so, war, famine, and disease were all too common in the ancient Middle East. That St. John would choose these punishments for his persecutors therefore comes as little surprise. As for the Antichrist, evidence points to the Roman emperor Nero, a vicious man who was ironically not remembered for his notorious cruelty as much as for the circuses and games he provided to the Roman public. By disguising Nero as the rider on the white horse, John could express his disgust for the emperor without endangering his life or those of his readers. Whether you believe the Four Horsemen are a prophecy of future events or a clever allegory for the Roman Empire, the riders and their horses remain a frightening and fascinating reminder of humanity’s destructive potential. 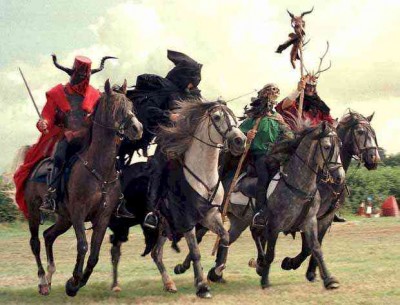 Tags Four Horsemen of the Apocalypse 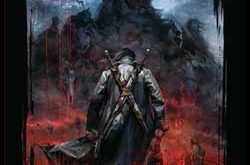