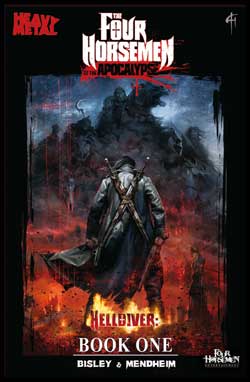 “The End is Here – Welcome to the Apocalypse! Raised by the Order of Solomon, Adam Cahill is one of a rare handful of highly trained warriors bound by bloodline to guard the Seven Holy Seals that contain the End of Days. But ageless forces have conspired toward a prophetic event foretold by numerous cultures and multiple religions, and when that cryptic date arrives, they strike against the order without mercy! Adam’s world is shattered, his family murdered, and he is sent spiraling into Hell itself. There, he must find three corrupt souls, chosen by Divinity, to join him in battle against the legendary Horsemen of the Apocalypse. These broken individuals must band together to not only save their own souls but decide the fate of Humanity.”

Dying Breath: 4.5 out of 5
Oh the fires of Hell are burning bright within the pages of this red-hot title from Heavy Metal. I have been a big fan of Simon Bisley for a while now, and I have to admit, I didn’t initially recognize this as his artwork. He brought something new to these pages that took my feelings on his style to a whole new level. His character designs are flat-out GORE-Geous from the main cast to the minions and demons that inhabit this world. There was the occasional panel where it was more recognizable, but overall this came off as visually as something new. I have to throw huge art credit to the coloring and lettering team as well. This book is so visually stunning. It is what I expect from something coming from Heavy Metal, and then some. I was even surprised when it came to the story. Coming from the house that brings me some of the darker material in comics, I thought this would border more on the Satanic side and instead I was treated to a story of religious balance. Mendheim and crew do an amazing job on covering more than one religious viewpoint as the end of the world is almost at hand, which I was happy about because most times this subject matter is covered from only a Christian point of view. The dialogue is strong and the pacing is fantastic. While most of the book is running on a high note, they do take time to relax for a brief second and move the story along. This book was beyond what I expected and gave me more than I even wanted. From the jaw dropping art to the mind-blowing storyline I want more. That leads me to the point where I now get to yell, “Hey Mike and Simon, what’s the deal? I want more now!” This is one Hell (pun intended) of a tease, and you better believe I am on board until the end. Can I be the fifth horsemen, Decapitation?

If you would like to buy or know more about Four Horsemen of the Apocalypse Book 1 you can find it at fourhorsemen.heavymetal.com/

Tags Four Horsemen of the Apocalypse