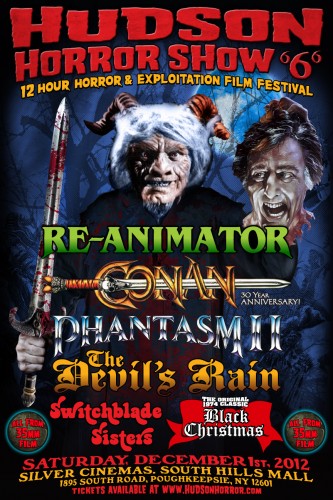 On Saturday, December 1st, 2012 (12-1-12), Hudson Horror Show 666 will present a whopping six movies (for the price of five) along with shorts and vintage trailers, all off rare 35mm films. It’s a massive, sweaty 12 hour explosion of horror and exploitation!

This is by the far the biggest and most diverse lineup of movies we have ever presented. The show starts and heaven will be torn asunder as you run from, THE DEVIL’S RAIN! Starring Ernest Borgnine, William Shatner, Tom Skerrit, and an appearance by John Travolta, this is the coolest of the Satan Chic classics from the 70’s.

One of the greatest exploitation movies of all time, SWITCHBLADE SISTERS, tells the story of the Dagger Debs, the tough as nails girl gang whose members were hot as hell. Quentin Tarantino loves this movie, but hasn’t quite stolen from it yet!

Not many sequels can equal their predecessors, but PHANTASM II is one of the few. With more action, more midgets, and well, more balls, Phantasm II shatters the myth that all sequels suck.

There are no midgets in RE-ANIMATOR, but director Stuart Gordon’s unrated bloodbath has just about everything else. Mad scientists, zombies, talking heads and the most insane oral sex scene ever committed to celluloid, this film is cinematic proof that Jeffrey Combs got robbed of a best actor Oscar in 1985.

Sound the trumpets of Crom, after 30 years; the original CONAN THE BARBARIAN makes it triumphant return to the big screen! Forget the boring, anemic remake; Arnold Schwarzenegger’s breakout film delivers more blood, blades and boobs than most vintage slasher films.

Speaking of slasher films, what’s a Hudson Horror Show without one? Have no fear as our mystery movie is now revealed to be the original BLACK CHRISTMAS. Again, screw the remake; this is the original yuletide horror classic from 1974, which many claim to be the very first true slasher film. And any movie starring John Saxon just kicks major ass!

Be sure to bring extra cash as we will have vendors selling more wares than ever before. Comic books, movie posters, super cool magnets, rare DVD’s, t-shirts, artwork and more will up for grabs at HH666. Horror author Jason Gehlert will even be in attendance signing copies of his brand spanking new book, Jeremiah Black. This book sounds even sicker and more twisted than Jason’s other works, for all of his info go to www.facebook.com/jason.gehlert.

Advance tickets are $26.00 in advance at our website, if any day tickets remain, they will be $30.00 at the door day of show, cash only. Doors open at noon, show starts at 1PM and runs until 12AM. One ticket gets you entry in and out all day long.

For more information on the show, head to www.hudsonhorror.com or email us at info@hudsonhorror.com. Advance tickets are going quick and are only on sale until Monday, November 26th at 11:59PM. Get your tickets now! We’ll see you on 12-1-12!!

Interested in becoming a vendor at the next show? Just shoot us an email to info@hudsonhorror.com.