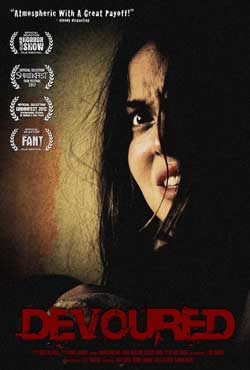 You Will Be Devoured…

Devoured is a great psychological thriller, which makes you think about the way the world thinks about us and us about them. With that said, this movie starts out with the main character, Lourdes (Marta Milans), dead on the floor of a Manhattan restaurant. Now the fun starts as we try to figure out how she died, and why. The movie then picks back up days, weeks, months, they don’t really say, before Lourdes dies. We get to see the inside of her little efficiency apartment; here it looks like all she has is a bed and television, and not much else. We also find out that she is Spanish, and works at night cleaning up the restaurant where she is found dead, but the most important thing you find out is that she has a son who needs a life saving operation. Now we are surrounded in her world as he understand why she is living in a small apartment, and looks like she is wearing the same clothes every day. 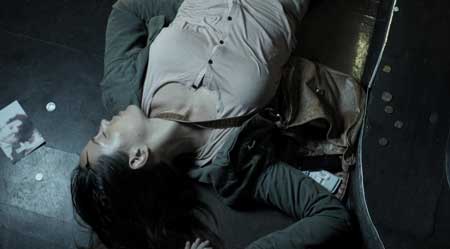 This is the feel of this entire movie, a depressing look at the life of an immigrate who only wants money to save her dying child. This is backed up by little shots of the extravagant food that is prepared in American restaurants and also on their huge price tags, with shots of customers flashing wads of twenty dollar bills. Another depressing look at the way Americans treat immigrate is the way the restaurant manager treats Lourdes, knowing that, for the most part, is going to just sit back and take the punishment.

You really start to feel bad for this character and the situation that she is in, and that’s what makes this movie good, the connection that you can make with the character. The question you have to ask yourself is what would you do to save your child? When you think, how can she still be there, taking the treatment that she does, they remind you that it’s for her little boy, with either a flashback, or a phone call to her mother where her son is staying. 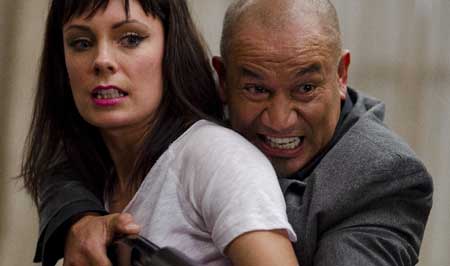 Then the plot takes a turn for the worst. Lourdes walks through the dining room area, and a man stares here down as she passes him. Lourdes continues up a spiral staircase to a small rest room. The man pays for his meal quickly, throwing down a bunch of twenties, and quickly follows her up the stairs and forces his way into the small bathroom with her. She tries to push him out, but isn’t strong enough to, so she listens to his proposal, which is money for oral sex. She says no at first, but then thinks of all the money he has, and ultimately decides to go through with it. The next scene is her vomiting into the kitchen sink, but she knows that she got about half a week’s paycheck from just this one action. So the next part of the movie is Lourdes seducing men as she walks up the spiral staircase, losing a little piece of herself as she does, but she keeps calling her mother and son, telling them that she will soon have the money and be on her way home. 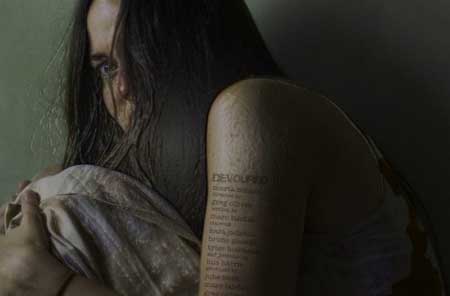 Now the confusing love story comes in to play, Lourdes is plagued with nightmarish visions most of the movie, and one night in the closed restaurant, she thinks someone, or something is after her, as she runs for the front door. When she gets there, she runs through it and into a fire fighter walking down the street with a coffee in his hand. This is Frankie (Bruno Gun), and he is the only person in the movie who treats Lourdes like a real person. He offers to help with anything that might be in the restaurant, but the monster is now gone. She offers to pay for his spilled coffee, but he refuses and goes on his way. 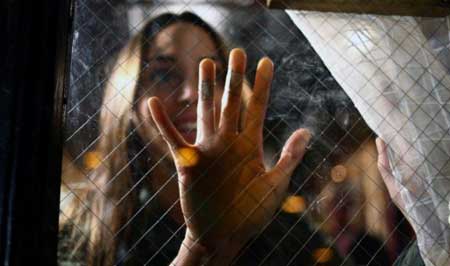 He comes back around later, were Lourdes makes him breakfast, while the restaurant is closed again. We get some back story from her, and once again really connect and feel bad for this girl. Now the movie is winding down, Lourdes is ready to leave to get back home, on her last day there, after the restaurant is once again closed, she starts seeing zombie like creatures coming from all different areas of the restaurant, but they look a lot like the guys that she has sold herself to. Now is this her imagination, are her transgressions coming back to haunt her, or is it for real? I don’t want to spoil the ending, but they give you enough clues that you could have figured it out by now.

This is a well written and directed film, it tells a story of what mothers will do for their children, and also has a great underlining plot about how people from America can sometimes act like they are better than anyone else. This is a must watch for anyone who likes psycho thrillers.