A new film for DimensionWerks Plan 9: Genesis is set to begin principal photography in February 2013.  The film is a science fiction fantasy that features low budget film director Ed Wood as the main character, they are still in the casting process.  Jeff Broadstreet is writing and directing and producing along with Lawrence Greenstein. 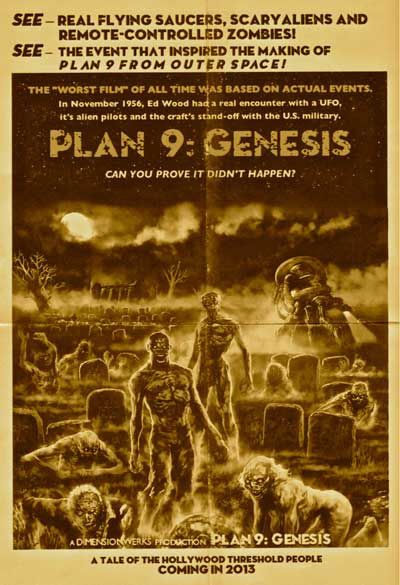 In this science fiction fantasy, Ed Wood, director of Glen or Glenda, is the lead character in what turns out to be the biggest story of his life. In November 1956, just months after the death of horror icon Bela Lugosi, Wood witnesses a UFO hovering above a deserted cemetery on the outskirts of Hollywood. He sees a strange ray beaming down from the flying saucer aimed at the cemetery. Resurrected corpses — now controlled zombies — crawl out of their graves!

Wood is later questioned, then threatened by the U.S. military about what he thinks he has seen. He also receives a visit from a very strange Man in Black (MIB), who attempts to harass him and keep quiet about what he may have seen. In typical Wood fashion, he instead gets the MIB to invest $300 in a new project.

Although none of his friends believe his story, he is inspired by the incident. Vowing to take this new project to a “whole new level of realism”, Ed Wood sets out to make his Citizen Kane. The result instead is Plan 9 From Outer Space — now widely regarded as the “worst film ever made”.