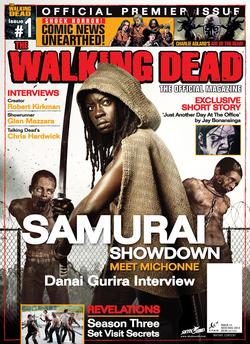 I’m sure the question you’ve been asking yourself as of late is…why isn’t there more “Walking Dead” swag to indulge upon? Well that question is quickly changing into ..why so much DEAD!”. Good reason……cause it’s what the fans want. On that note, we say a warm welcome to the official “The Walking Dead” Magazine as it debuts on its first issue.

With season 3 now underway, I’m sure you’re curious about what’s coming down the pipe, what the creators have to say, and what can you look forward to.. Issue #1 wastes no time into digging right into the bits and pieces. In fact I had to skip about 4 sections that warn of early spoilers. Sure, I get it, the comic books have been around long enough to do that portion for ya, but I like to experience every week with a new sense of wonder. No spoilers for me.

In that respect, you’ve got lots of season 3 info, what you can expect, and alot about the new characters making their debut. 2 of which, which we’ll hear more about…..the samurai “Michonne” and the infamous “Governor. Actress Dana Gurira is featured with a full interview profiling her new character. You gotta love a chick with 2 zombie walkers for pets, though as viewers we can expect to see quite a bit on this sword-toting gal.

The issue begins with a feature creator Robert Kirkman interview who details us a bit on his own perspectives. One thing’s for sure, this breakaway series is growing with more episodes, more interest and a dedicated horror genre following that pushes forth one season after the next. With season 3 we come upon the introduction into the Woodbury prison story arc suggesting plenty of new things in store for viewers.

“Into the Lion’s Den” details the production end with commentaries on how the team has banded together to give us creatures, set designs and camera work prefect for the minions of interested Walking Dead followers. Additionally we have an exclusive shot story, a look at a few of the artists involved (and art) and a bit about the “Talking Dead” TV series. Glen Mazzura provides an exclusive, while a new section titled “The Regulars” lays out the groundwork for lots more Walking Dead tidbits.

Oh ya, don’t forget to check out the sneak preview of the “Spawn.com” Walking Dead Figures soon to arrive………. count me in!

This first issue comes from the wonderful team at Titan Books and magazines who have done a marvelous job at keeping its issues pages full of fact, fiction and future. Those who tune in, will want to dig into the behind the scenes this magazine offers while catching a glimpse at what’s to come. Full color and chock full of images and illustrations, this is certainly a prime read for horror genre fans and of course fans of the TV series. Future issues promise a deeper look into characters, the comic books, the creators, and the FX/production details.