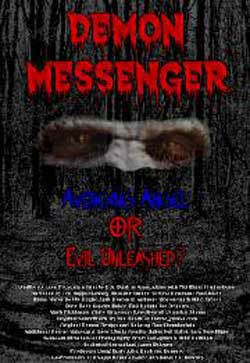 Demon Messenger is the tale of a farm family that has been torn apart by the lure of big money from the natural gas that lies in the Marcellus shale formation beneath their property. Most of the family members want to sell the land and cash out, but one is a member of an anti-fracking organization and is trying to preserve their land from the dangers of hydrofracking. In an act of desperation the American Indian Legend of the Demon Messenger is called out to protect the land

“Demon Messenger” (2012) is a new film out of the Buffalo New York area directed by Ted Nappi and written by D.A. Bush. The film, works off of a small budget using the forest of the area for most of its setting. While initially you are thrown into conversations that you “might” have to sort out, the purpose here seems to be the issue of the environment and the buying up of land for oil drilling.

We are greeted with a newscaster that details the usage of “water fracking”. Which is a controversial method being used by the gas companies using water to extract oil a bit faster. There is more to learn from this if you are able to follow the conversations, but in short it’s become an issue for the tree-hugger groups who want to see the land preserved. 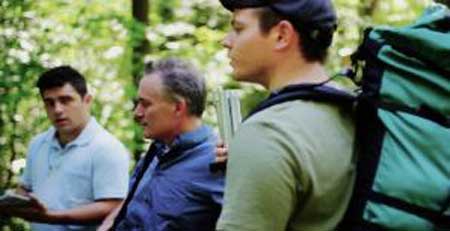 I knew I went into this reviewing a horror film, but on some levels I believe it also serves as “environmentalist ” message film. Whether intentional or not, it’s pretty clear what the filmmakers are alluding to.

The group decides to call upon an ancient spirit that they call “the demon messenger” who arises from beyond to punish those who would destroy the forest. The locals are up in arms as they are paid top dollar for their land by oil companies. In short many in the area are becoming millionaires with the simple signing over of their land. A moral toss that usually loses when approached with large sums of money.

Paxxton Oil company sends out a small team who set land markers. They are also being infiltrated by a tree-hugger activist posing as a part of their operation who tips off the group so that they can “unmark” the sections (thus delaying the process). 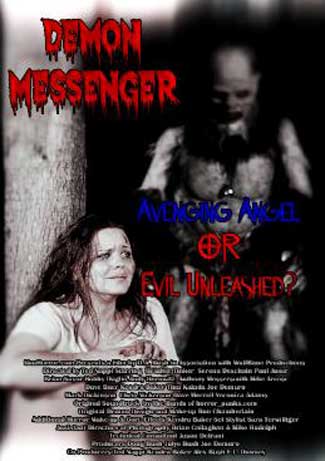 As the 2 groups set about on their own purpose within the woods, they are each approached by a small team of 3 hunters, who while intimidating carrying a round of rifles profess their need to protect others from the tragedies occurring within the woods. There is a misdirection bit of humor here that otherwise would suggest the 3 men as being good old boys looking for trouble (which is a trend we’ve seen in countless woods centric films). The movie roots itself around the 3 groups which each serve a purpose to the story.

On a whole, the film is a bit slow moving for my tastes but does benefit from one really strong factor. The makeup job and demon used is very well done outfitted from head to toe. I’m sure this was considered in the production, however I felt that seeing the demon in pure daylight walking around like a b-movie offspring actually took away from its attacks and suspense build. 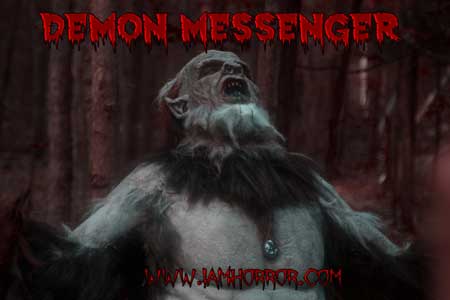 Filming “any” horror film in daylight and keeping it effective is a hard choice for filmmakers, who miss out on the ambience of the night’s darkness. However it also means a harder shoot and alot of proper lighting to be on hand. The budget may have not been able to tackle this route, though what we end up with is a monster that is always fully disclosed (such as the unthreatening nature of Sigmond and the Sea Monster era). 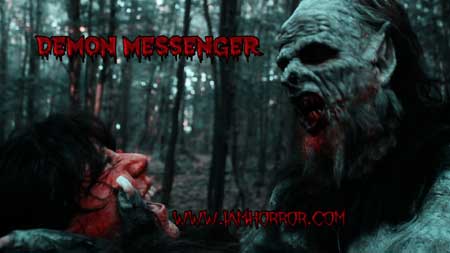 It was clear on completion that the film could really benefit from color toning and a contrast shift to force that unfilmed darkness into the presentation. Anyways, that’s my input on the presentation. “Demon Messenger” does tackle a number of story arcs that fuel pretty well together and of course its well done creature that seems to be a hybrid of an ape, a demon and a Wendigo. Enuff said, show some support to the Buffalo film industry.