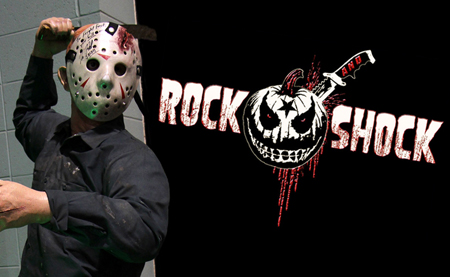 Rock and Shock is an annual horror convention that takes place every October in Worcester, MA. Its ninth incarnation occurred on October 12-14, and I was on hand for all three days. Perhaps the biggest draw this year was former Kiss drummer Peter Criss, who had his own private signing room. Other celebrity guests included Danny Trejo (Machete), Tony Todd (Candyman), Doug Bradely (Hellraiser), Sid Haig (The Devil’s Rejects), Bill Moseley (The Devil’s Rejects), Derek Mears (Friday the 13th remake), and many more.

As the first day of the festivities, Friday typically involves a lot of exploring. One can get lost in Rock and Shock’s massive vendor room. (Unlike many conventions, which take place in hotels, the DCU Center is a large, open area that allows for plenty of room to walk around.) The massive list of dealers included filmmakers, artists, crafts, movies, music, toys and just about anything horror-related you could imagine. The convention also boats rooms for celebrities, Q&A sessions and film screenings.

I stopped in at the Women in Horror panel, which featured Heather Langenkamp (A Nightmare on Elm Street), Lisa Marie (Ed Wood) and three members of the New England Horror Writers organization. It was interesting to get the female perspective on what is often a male-dominated genre and to see how it varied between actresses and authors. A later panel had Tyler Mane discussing his work on Rob Zombie’s Halloween films, in which he portrayed the iconic Michael Myers. Despite his intimidating stature, Mane came off as a nice, funny guy. 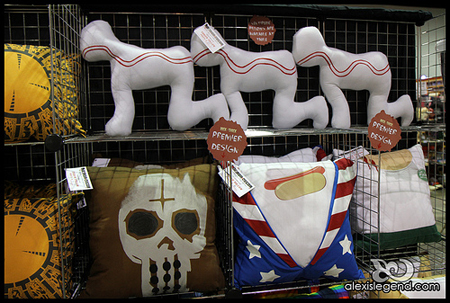 What makes Rock and Shock so interesting is that, as the name suggests, it combines music and horror. In addition to the convention experience at the DCU Center, there are concerts each night down the street at the famed Palladium. Friday night combined the opening night of two separate tours – the Misfits’ Halloween tour and one headlined by Shadows Fall. As such, the crowd was an interesting mix of music fans young and old, varying between push pitting, hardcore moshing and slam dancing.

The first band I caught was God Forbid. It has been a while since I’ve seen the New Jersey metalcore act, but I’m happy they’re still doing their thing. Up next was western Massachusetts’ own Shadows Fall. Frontman Brain Fair has been playing at The Palladium for about two decades since fronting metalcore pioneers Overcast, so he wasn’t afraid to sing along with fans on the barricade or even crowd surf on top of them. They opened with “The Light That Blinds” and played for about 45 minutes, closing with “What Drives the Weak.” The set spanned their career, ranging from material from this year’s Fire From the Sky to the title track from 2000’s Of One Blood.

I know the modern incarnation of the Misfits is only a shell of what they once were, but they are one of my favorite bands. The current line-up consists of original bassist Jerry Only, who now handles vocal duties as well, Dez Cadena of Black Flag fame on guitar and former Murphy’s Law drummer Eric Arce. Needless to say, it’s not the same horror punk progenitors from 35 years ago, but they’re bona fide punk rock legends nevertheless. (I met them at a signing earlier in the day and was pleased to find how friendly all three of them were. They happily signed and posed for photos with everyone who came through.) 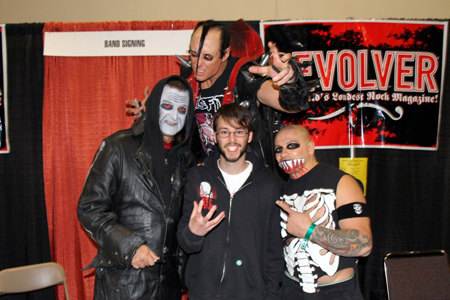 With the stage shrouded in smoke, the Misfits came out playing the title track to their latest album, The Devil’s Rain. While the thunderous opening lends itself to an atmospheric intro, the song was unknown by the majority of the crowd. It was followed by two additional new cuts, “Vivid Red” and “Land of the Dead.” I don’t mind the new material, but I was surprised by how much they played. The new songs are longer, and they seemed to test some of the crowd’s patience at times. It didn’t help that the band played them in blocks, rather than interspersed throughout the set.

Following the Michale Graves-era “Scream,” the group finally revisited their classic Glenn Danzig era with “Hybrid Moments.” With next to no speaking except introducing song titles, as well as plowing through older material in double time, the band was able to jam-pack a lot of tunes into their half and a half set. They went on to play many other old favorites, such as “Die, Die My Darling,” “We Are 138,” “Where Eagles Dare,” and “Skulls,” in addition to other newer songs. Cadena took over vocal duties for “Death Ray” and a cover of Black Flag’s “Rise Above.” Appropriately, they ended the night with “Halloween.”

No one can replicate Danzig’s signature croon, but Only proved to be a suitable live replacement. Even without the range of Danzig or Graves, he was able to perform the songs satisfactorily. The live mix left a bit to be desired, however; the guitars were lost in the muddled mix, making some songs difficult to recognize. Regardless, I was happy to see Only carry on the band’s legacy. 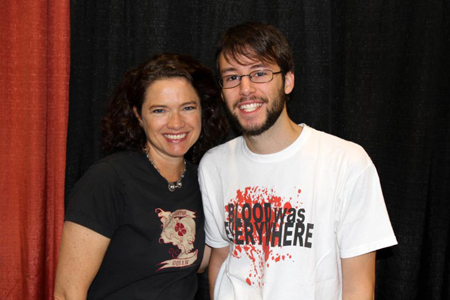 Saturday is always the most active day of any convention, and this one began with an impromptu screening of I Am Nancy, a documentary by Heather Langenkamp about the legacy (or lack there of) of her A Nightmare on Elm Street character. In it, she attempts to discover the reasoning behind audiences’ fascination with Freddy Krueger rather than Nancy Thompson. With filming largely taking place at conventions, it was an appropriate viewing. It’s lighthearted and fun for the most part, but it gets heavy toward the end, particularly with Wes Craven, his daughter, Jessica, and fans who identified with Nancy in times of need.

I later returned to the screening room for a showing of Ricky Laprade’s Villanelle, a locally-produced, independent horror/thriller. It begins as a familiar tale: a disgruntled, alcoholic cop (Rich Tretheway) moves from the big city to a small town, where he finds that old habits die hard. It puts an interesting spin on the story with the introduction of a mysterious woman (Gillian Williams) who was left for dead by a serial killer. The film’s cinematography is stunning, particularly during the haunting dream sequences. Not unlike a music video, the atmospheric footage is set to serene music. These scenes slightly hinder the pacing, but they’re so visually stimulating that it’s hard to mind. 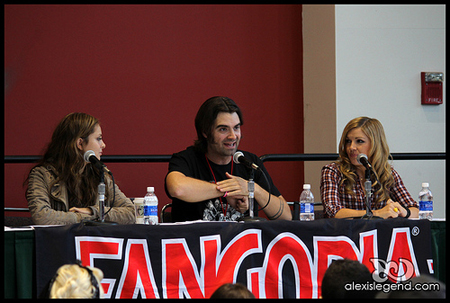 The highlight of Rock and Shock came from the cast of Holliston: Adam Green, Joe Lynch, Corri English, Laura Ortiz and Gwar’s Oderus Urungus. Much like how Holliston goes against the grain – the FearNet show follows the classic sitcom formula but is ripe with genre references – the crew put a twist on the typical convention panel. After answering fan questions, they performed a live reading of a script that was written exclusively for the convention. Not only did it contain lots of local references (Green is a Massachusetts native), but it also gave fans the chance to participate.

Twisted Sister vocalist Dee Snider, who is a regular on the show, was scheduled to be in attendance but had to cancel at the last minute, so a fan was called upon to do his best impersonation. A female fan was also recruited to play the role of Maureen Lipschitz, Adam’s ex-girlfriend who gave him genital warts. Some celebrity guests also made cameos: Rock and Shock creator Kevin Barbare read the exposition and impersonated Michael Caine; Derek Mears reprised his role from the show as Officer Duffy; Bill Moseley had an energetic stint in a commercial for Crazy Max’s Discount Mart; Sid Haig played an exaggerated version of himself; and Tony Todd played himself as Horrace Pinker in a remake of Shocker(!).

I’ve seen a lot of cool things at conventions over the years, but the Holliston reading may very well have been the best. While the show is funny on its own, the reading had both the audience and the cast in stitches. It was refreshing to see something new at a con, and I hope other guests take notice. Also noteworthy is the fact that the Holliston crew all signed autographs and posted for pictures free of charge, which is practically unheard of at conventions. 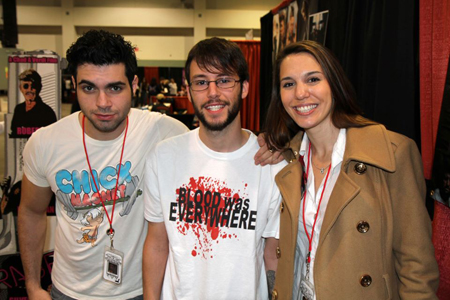 Rhode Island-based production company Woodhaven Productions hosted a free signing of their own, this one featuring Eric Roberts (The Dark Knight), Christy Romano (“Even Stevens”) and Jonathan Silverman (Weekend at Bernie’s), among others, to promote their upcoming films Infected and Self Storage. Everyone was very kind. Saturday was capped off by the world premiere of Glenn Ciano’s Infected. I actually worked on the movie for a couple of days, so I may be a bit biased, but I enjoyed it. It’s a zombie(-esque) movie, highlighted by performances from Michael Madsen (Reservoir Dogs) and William Forsythe (The Devil’s Rejects). Both are great actors, so it was a treat to see them share the screen.

It was a long day, so I sat out that night’s concert, headlined by the almighty Gwar. If you’ve never experienced a Gwar show, I highly recommend you remedy that as soon as possible. Rumor has it that they threw Danny Trejo and the Holliston cast into the meat grinder and even covered Kansas’ “Carry On My Wayward Son.” Needless to say, I’m still kicking myself for missing it. They’re not a band I listen to very often, but their blood- and semen-soaked live show is unparallelled. 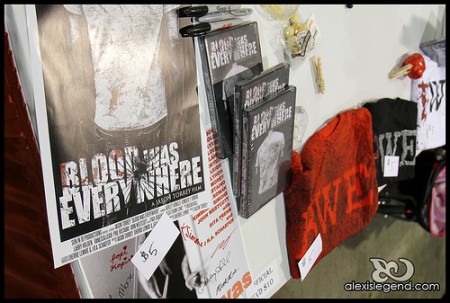 Sunday kicked off with the festival premiere of another movie I worked on, Blood Was Everywhere. The indie slasher was the first production in which I was involved from beginning to end, and I’m proud of the outcome. The reaction seemed largely positive, and we sold quite a few of the brand new DVDs at the event as well. I missed the screening, however, as I had the chance to speak with the lovely Heather Langenkamp. You’ll be able to read the full interview soon, but we discussed the A Nightmare on Elm Street franchise, I Am Nancy, Cabin in the Woods and more. Langenkamp was a total sweetheart.

Speaking of interviews, I was also the subject of an interview on Sunday. A young filmmaker by the name of Kyle Kuchta is making a documentary about horror conventions entiled Fantasm: Season of the Con. A mutual friend, the infallible Kristy Jett, put the two of us in touch, so I briefly spoke about what the shows mean to me. It was fun being on the other side of the camera for a change, plus it gave me an opportunity to reference Halloween III’s Silver Shamrock song. 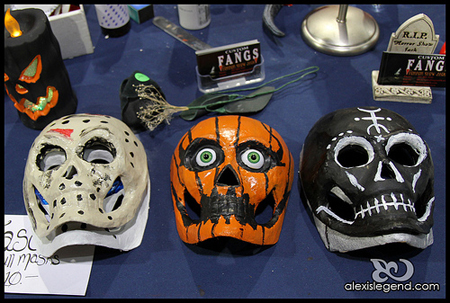 Rock and Shock regulars Insane Clown Posse couldn’t make it this year, but they sent their Psychopathic Records labelmates Blaze Ya Dead Homie and Anybody Killa on Sunday. I didn’t bother going to that show, but there were plenty of juggalos eager to see it.

There are many great horror conventions out there, but none that feature full-blown concerts each night. If horror and music were part of a human centipede, Rock and Shock would be the middle section that binds them together. You really can’t find a better bang for your buck. Add in the unique experience brought by Holliston’s script read, and you have one hell of a fantastic weekend. I look forward to seeing them try to top it for next year’s tenth anniversary.

See all of my photos from Rock and Shock here.