I’ve been counting down the days all year, and it’s finally here this weekend! Rock and Shock 2012 will take place will take place October 12-14 at the DCU Center in Worcester, MA. As a horror fan from Massachusetts, I look forward to the convention every year.

Many of the guests will participate in Q&A sessions throughout the weekend, as well as a live script reading with the cast of Adam Green’s Holliston. There will also be a film festival, including the world premiere of Glenn Ciano’s Infected, among other independent horror features and shorts. A local slasher on which I worked, Blood Was Everywhere, will have its festival premiere on Sunday, so be sure to check it out if you’re around. Additionally, there’s a huge room of vendors will all kinds of merchandise and other such goodies.

What makes Rock and Shock really stand out among the conventions, in my opinion, is that it combines the horror con experience with nightly concerts down the street at The Palladium. As a big fan of music and horror, this is like a dream come true. The festivities kick off Thursday night with a pre-show headlined by the post-hardcore band Alesana. Friday will feature punk legends the Misfits, along with Shadows Fall, God Forbid, Vision of Disorder and more. Saturday will include Gwar (a Rock and Shock tradition), DevilDriver, Cancer Bats and more. Sunday will wrap it up with Psychopathic Records artists Blaze and ABK.

Rock and Shock truly offers something for everyone, leaving genre fans of all ages satisfied. If you’re anywhere in New England, it’s worth the trip; there’s no better convention in the area. I will be there all weekend, so if you happen to see me, be sure to say hi! Keep an eye out for my write-up on the event next week.

For more information on the event, visit RockAndShock.com. 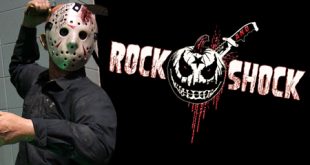