Academy-Award nominated actor Thomas Haden Church co-stars as a tough as nails Park Ranger who teams with an unsuspecting teenager, played by David Dorfman, to escape a cursed stretch of highway that resurrects roadkill in the form flesh-eating zombie animals. This new breed of terror is not just playing dead. 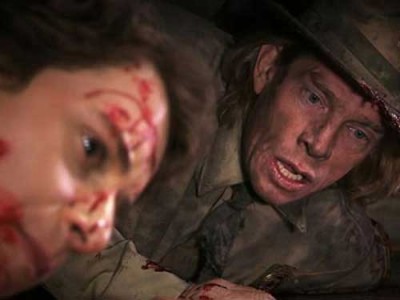 Zombie Roadkill centers around a group of college kids as they are driving on an unfamiliar road. Everything seems fit for a road trip to the lake, but when the group accidentally runs over an unsuspecting squirrel, they quickly realize there will be a price to pay. The cursed road brings the zombie squirrel back to life to haunt the kids. After the kids crash and everyone is injured except the younger brother, he is forced to set out on a journey to defeat the ancient curse and save his brother and friends before it is too late. Zombie Roadkill is scheduled to air spring 2010 on FEARnet.com and the FEARnet On Demand VOD network.

The series’ claw-scratching and spine-tingling action unfolds over six, four- to five-minute episodes. David Green will be directing the series penned by Henry Gayden. Aaron Lam of Ghost House Pictures will be producing with FEARnet’s Jim Burns serving as executive producer. Frank Langley and Tom Bacho of Quantum FX (Where the Wild Things Are, Star Trek, Watchmen) have come aboard to bring all the terrifying creatures to life.