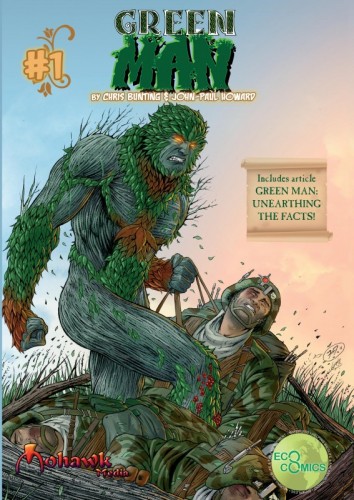 Publisher Eco Comics has today announced the launch of a comic book series featuring one of the most iconic and prolific characters from myth and legend, the Green Man.

For over a millennium carvings of the Green Man have spread throughout churches, abbeys and cathedrals across the UK and Europe, and can also be found in the USA and Canada.

The publisher says: “Green Man has come to represent the environmental movement and our endangered eco-system, and so has more relevance now than ever. It is therefore fitting that his comic book debut will be entirely paperless and published by Eco Comics”.

Eco Comics has released the first issue exclusively on a variety of digital formats in order to have minimal negative impact on the environment and wildlife.

Green Man #1 is by the British team of writer Chris Bunting and artist John-Paul Howard.

Bunting says: “I’ve written a number of cultural heavyweights but the Green Man is extra special. The mystery surrounding him makes him very intriguing, while an artist’s sketches dating from the 1230s could make him the first comic book-style character in history.

“Yet in almost 800 years since, I don’t believe that he has ever been given his own story, let alone comic book – until now.

“It is even more remarkable considering that the Green Man influenced Treebeard in J.R.R. Tolkien’s Lord of the Rings, Puck in Shakespeare’s A Midsummer Night’s Dream, and so many comic book characters.”

Shrouded in mystery, this ancient leafy-headed mythical being is often considered to be of pre-Christian or ‘pagan’ origin. However the publisher states that the in-depth historical investigation that accompanies the story reveals startling conclusions.

Bunting adds: “I won’t give much away about the story itself with its amazing art, but the Green Man’s return is prompted by a threat to the last woodland in England. And when another legendary character turns up, all hell breaks loose.”