Chained comes out this week, on October 2nd, via Anchor Bay Home Entertainment, and we have two copies of the film on two-disc Blu-ray/DVD combo pack to give away! Chained is the latest effort from Jennifer Chambers Lynch (Boxing Helena, daughter of David Lynch). I was a big fan of the film; read my review.

In Chained, when he was 9 years old, Tim and his mother were abducted by taxi-driving serial killer Bob. Tim’s mother was murdered. Tim was kept as a chained slave, forced to bury the bodies of young women Bob drags home and keep scrapbooks of the crimes. Now a teenager, Tim and Bob share a depraved father/son/protege relationship. But who will ultimately sever the bond between ‘family’ and unimaginable horror?

Entering the contest is easy. Simply email me with “Chained Contest” in the subject. Be sure to include your name, mailing address and zip code. Sorry international friends, but this contest is open to U.S. residents only. No PO boxes.

Entries will be accepted for a week, until October 8th, at which point two winners will be drawn at random. Good luck!

Pre-order Chained on Blu-ray or DVD. 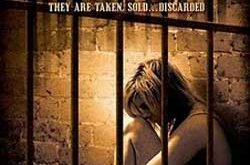