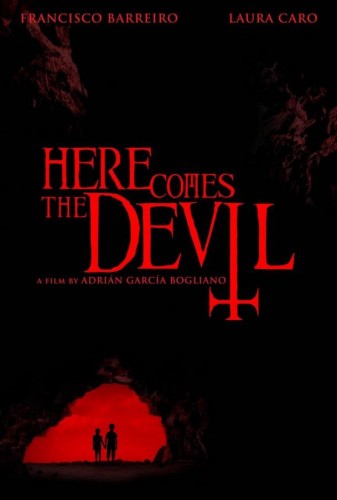 The Wagner/ Cuban Company’s Magnet Releasing announced last night at Fantastic Fest – as part of the films introduction at the US Premiere — that it has acquired North American rights to Adrian Garcia Bogliano’s HERE COMES THE DEVIL. The announcement was made to an excited crowd at the 11:20pm screening at the Alamo South Lamar. Director Bogliano, producer Andrea Quiroz Hernandez and stars Francisco Barreiro and Lura Caro were on hand as the announcement was made by Fantastic Fest lead programmer Rodney Perkins. Tim League marked the occasion by having Bogliano saber a bottle of champagne as flutes of champagne were served to the audience as part of a mass toast.

Already lauded by the crowd who loved its spirit, scares and sensibility at the Toronto International Film Festival, HERE COMES THE DEVIL combines modern indie filmmaking and storytelling with a hint of ‘70s-styled psychological horror that may not just be psychological. Barreiro and Caro are parents whose preteen son and daughter inexplicably reappear after being lost overnight on a desolate, cave-riddled mountainside after a casual hike became every parent’s nightmare. The good luck and good fortune of their return soon changes, as the children’s behavior suggests ominous and unspeakable events the night the children were lost that continue even now. As a loving couple – and loving parents – try to care for and protect their children, the ancient and half-whispered legends around the caves and the mountain and those who have gone there before become too strange to believe … and too dangerous, no matter how insane, to ignore.

Magnet/Magnolia president Eamonn Bowles said of the acquisition “HERE COMES THE DEVIL is a singular, crazed trip of a movie. We’re happy to be in business with Adrian, whose short in ABC’S OF DEATH merely whetted our appetite for this full on dish of creeped-out mayhem.”

“I am so honored to be part of the Magnet Releasing family. Their devotion to releasing quality genre films has always impressed me, and I am overjoyed to be working with them on sharing my latest film with North America,” added Bogliano.

Producer Andrea Quiroz Hernandez added to Bogliano’s sentiments by saying, “The fact that Magnet Releasing has taken a chance on such a bold Spanish language film such as ours truly reiterates their commitment to quality avant-garde cinema. We are truly ecstatic to have partnered with them on this venture, and can’t wait to see where the film goes.”

“Adrian’s unique style and voice is the perfect fit for Magnet, as they are remarkably consistent in bringing the best in genre films to fans. We are very pleased to have our original production as the newest addition to their extraordinary release slate.” said Greg Newman, EVP of MPI/Dark Sky Films.

This deal was negotiated for Magnet by SVP of Acquisitions Dori Begley and Josh Braun of Submarine.